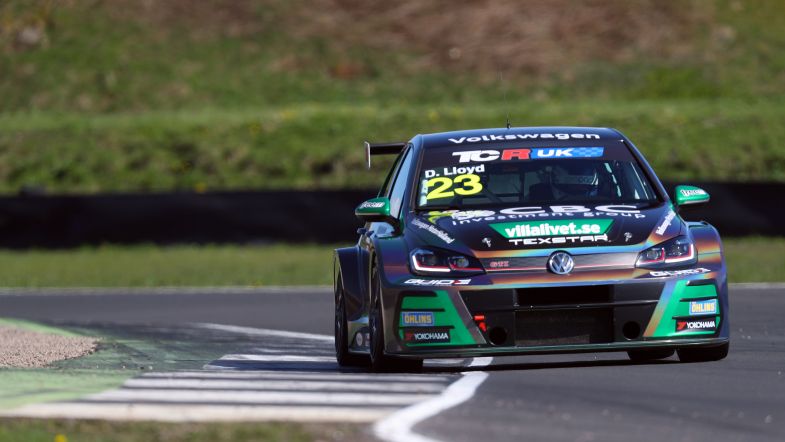 Dan Lloyd secured his second successive TCR UK pole position with a record-breaking lap at the reversed layout of Knockhill as he continues his dominance of the weekend.

The WestCoast Racing driver set a quickest time of 50.823 to claim the top spot, adding a further 11 points to his championship lead.

Aiden Moffat recorded the second fastest time, but was over a quarter of a second in arrears in his Alfa Romeo Giuletta TCR, while Lloyd’s title rival Ollie Taylor took his Honda Civic FK2 TCR to third place.

Taylor had set the early pace in his Pyro Motorsport Civic but was quickly usurped by Lloyd’s Volkswagen Golf GTI TCR. The championship leader put in a time of 51.210 to go to the top of the pile.

Moffat was the nearest challenger to Lloyd’s dominance and got to within one-hundredth of a second in his Alfa Romeo Giulietta TCR approaching the half-way stage. But Lloyd responded, breaking the outright lap record for a TCR car round Knockhill to extend his advantage over the Scotsman to two-and-a-half-tenths.

Andreas Bäckman struggled to find enough pace in the final moments to improve on his fourth place, having run strongly in the top three early on. The WestCoast Racing man finished nearly seven-tenths of a second back from team-mate Lloyd.

Despite missing a large chunk of practice time due to an engine failure, Josh Price was an strong fifth for Team BMR. The team had to borrow a spare Honda Civic engine from Team Pyro prior to the session, making Price’s efforts even more impressive.

Another to miss out on track action this morning was Sean Walkinshaw. The local man received spare parts for his Sean Walkinshaw Racing Honda Civic in time for qualifying and set the 10th fastest time of the session.

Fellow Honda driver Finlay was sixth in the newer FK8 version of the car, ahead of Lewis Kent’s Hyundai i30 N TCR.

Jessica Bäckman ended the session eighth, the first driver to finish over a second behind Lloyd, ahead of Darelle Wilson’s Vauxhall Astra TCR. Rounding off the field was Aiden Moffat Racing’s Derek Palmer Jr, who endured another frustrating session in the Alfa Romeo Giulietta.

The grid for race two will be announced in due course, with the drivers’ second fastest lap-times setting the order.