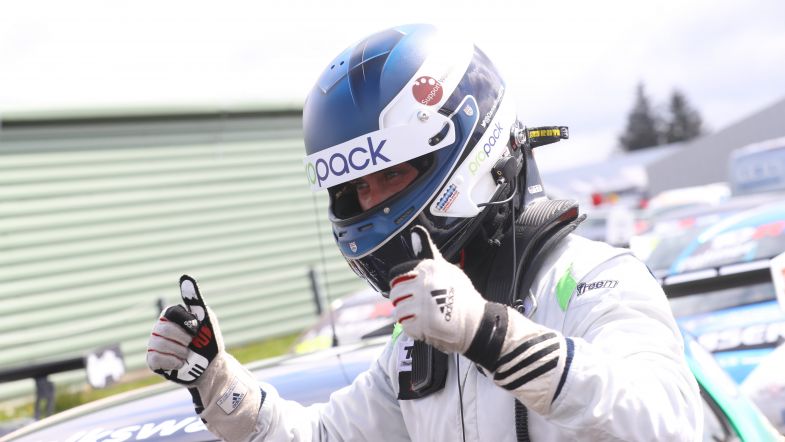 Dan Lloyd fought his way through from ninth on the grid to take victory in the second TCR UK Touring Car Championship race at Knockhill, maintaining his 100% record in the championship this season, while title rival Ollie Taylor failed to finish.

The WestCoast Racing driver made an assertive move on erstwhile leader Josh Price on the run to Clark’s and maintained a steady margin to the Honda Civic TCR man either side of a safety car intervention.

Taylor clashed with Lloyd’s team-mate Jessica Bäckman at the Hairpin as the pair disputed fourth place. Both suffered damage in the collision but while Bäckman continued, Taylor’s race ended in the gravel trap.

Sean Walkinshaw completed the podium in third, holding off waves of attacks from Andreas Bäckman and Darelle Wilson in the closing stages.

Wilson recorded a career-best finish in fourth in his DW Racing Vauxhall Astra TCR, ahead of the Swedish siblings.

At the start, Lewis Kent in the Essex & Kent Hyundai outdragged Wilson off the line before taking the lead from pole-sitter Walkinshaw by tapping the rear of the Honda Civic.

Their contretemps allowed Price to consolidate third place as the field sprinted up to Clark’s.

Kent had built a 1.6 second lead over Walkinshaw, who quickly lost out to Price under braking for the Hairpin, but the Hyundai i30 N TCR driver hit trouble with a tyre delamination ultimately derailing his challenge.

Meanwhile, Lloyd made great inroads into the field and made up three spots off the line to run sixth. The Volkswagen Golf GTI TCR driver was mighty under braking and stole fifth from Wilson.

The championship leader was made to bide his time before overtaking Jessica Bäckman at the Hairpin. Once cleared, Lloyd then set a myriad of fastest lap-times, outstripping Walkinshaw and then Price exiting the Hairpin to assume the lead.

Lloyd won the race after a late safety car saw the race reduced to a one-lap dash after Lloyd’s team-mate Jessica Bäckman and Pyro’s Ollie Taylor collided at the hairpin, with Taylor’s car requiring recovery.

Lloyd has now taken a perfect score from the first two race weekends heading to the next round at Brands Hatch in three weeks’ time.