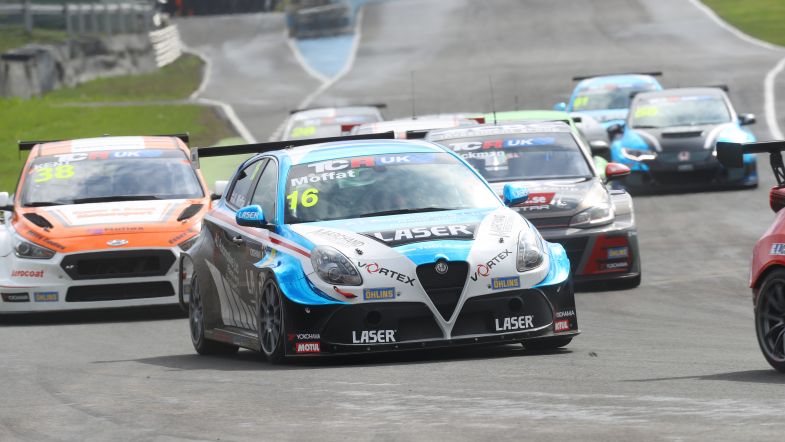 BTCC race winner Aiden Moffat will take no further part in the TCR UK series after announcing that he is to withdraw from the championship after two rounds.

The Laser Tools Racing-backed driver had joined forces with Derek Palmer for a two-car assault on the series, but endured a tough start to the year at the wheel of his Alfa Romeo Giulietta TCR.

Although the Scot picked up a second place finish in round one at Silverstone he then failed to finish the second race as a result of a fuel shortage issue and was keen to try and bounce back to form on home soil at Knockhill.

Showing strong pace to qualify on the front row of the grid, Moffat was unable to finish either race as a result of mechanical issues whilst there was also known to be frustration about the procedural issues that occurred in the run-up to the opening race – where he was briefly moved up to pole when four cars were excluded from qualifying prior to a successful appeal.

Moffat will now switch his focus solely to the BTCC, where he sits sixth in the points heading to Thruxton this weekend.

“We have decided to leave TCR UK as incidents at both last weekend’s Knockhill races plus the previous meeting at Silverstone have left us both frustrated and perplexed,” team manager Bob Moffat said. “Certain decisions and actions have made us completely lose confidence in the series, and after a lot of thought and discussion we have decided to call it a day.

“However we feel the format has a lot of potential and we offer our best wishes to the series and its competitors. We would also like thank Derek Palmer and Romeo Ferraris for giving us the opportunity.”

Responding to the announcement, series bosses expressed disappointment of Moffat’s departure but wished the Scot all the best for the future.

“We were disappointed to learn of the decision by Laser Tools Racing to withdraw from the TCR UK championship,” a brief statement read. “We would like to thank the team for its participation in the series and wish Aiden every success in the future.”

Whilst Moffat and Laser Tools have departed, Palmer may still continue to run his car under the DPE Motorsport banner, although his future participation in the series has yet to be made clear.