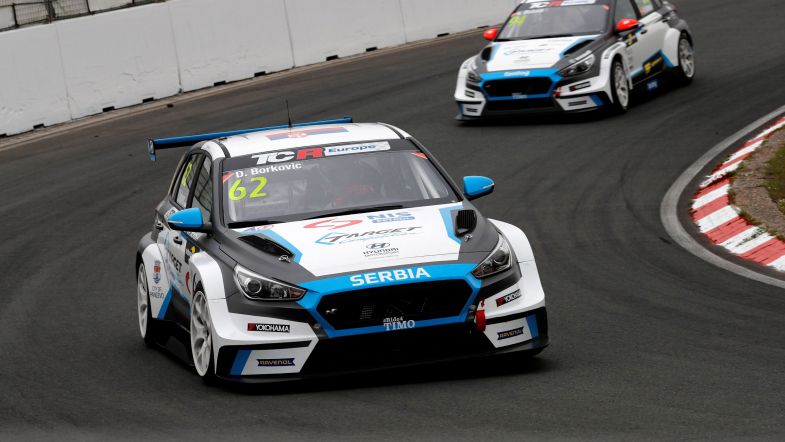 TCR Europe championship leader Dusan Borkovic has hit out the latest raft of changes in Balance of Performance (BoP), namely the 20mm increase in ride height for the Hyundai i30 N TCR, which he says have seriously affected the car’s handling.

The Serbian qualified in fifth position, just under a second behind Jaap van Lagen in the WRT Audi RS 3 LMS during today’s qualifying session, and has taken particular aim at the Volkswagen and Audi marques for allegedly influencing the FIA and TCR promoter WSC to introduce further changes to the BoP this weekend.

“The compensation weight of 20-30kg doesn’t affect the car so much, it’s the two centimetres that affects the car a lot when you’re basically driving an SUV,” said Borkovic to TouringCarTimes.

“Everybody saw at the Nürburgring the Volkswagen Audi Group cars were about the same as Hyundai, so why did they change two things (power and ride height), why not only one thing? It’s too dramatic. The Audi was much faster on the straight in Germany, so why have they reduced the power of the Hyundai when it’s already slower on the straight?

“I knew that after the wins of the guys in WTCR and my wins in TCR Europe that people would cry, especially the people from Audi. I don’t know why they are crying so much. They have to try more than to cry like this, it’s not a sport for girls, it’s for men,” he continued.

“Last year, in Oschersleben, China and Dubai it was a ‘Volkswagen Cup’ with Golfs 1-2-3-4-5, so why didn’t the BoP get changed when my Alfa was two seconds slower? Now when it’s just a couple of tenths, as soon as they cry, they change it.

“I think the car is still good, but I want to know what’s the next step? Our car is now three centimetres taller than the Audi, it looks like I’m in a Santa Fe. The car is not built for this height, our dampers are not in the correct position for this and all the Hyundais are struggling to get the right set-up.”