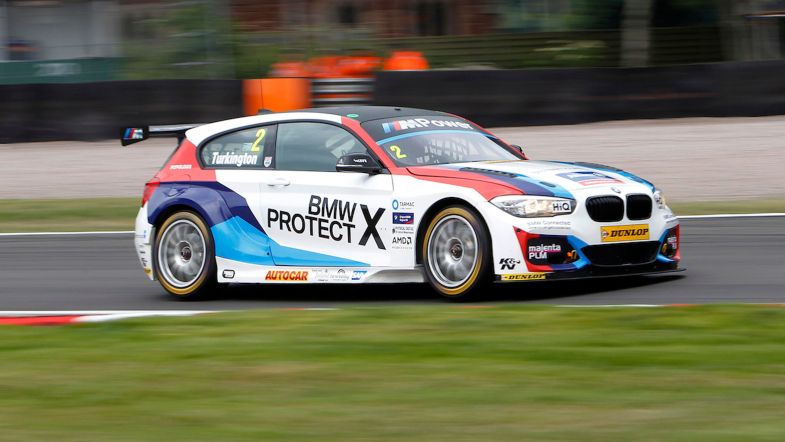 West Surrey Racing driver Colin Turkington has launched into the lead of the BTCC drivers’ standings after a drive through the field in the second race at Oulton Park, finishing ahead of the Team Dynamics Honda of Matt Neal and the Motorbase Ford of Tom Chilton.

Tom Chilton was promoted to pole position after Race 1 winner Matt Simpson was forced to sit out the race as his Eurotech Racing team were forced to change the engine on his Honda Civic.

Chilton got away well and was able to hold the BMW 125i M Sport of Andrew Jordan at bay at the start, while there was drama further behind after the Team Dynamics Honda of Dan Cammish bounced off the circuit at Cascades and rejoined the track, with many cars caught up in the melee, forcing both Aiden Moffat in his Mercedes, and previous championship leader Josh Cook in the Power Maxed Vauxhall to pit with damage.

Brett Smith caused a similar fracas later on the opening lap, as the Eurotech Honda driver spun out at the hairpin, but fortunately wasn’t hit by anyone.

Turkington was up to fourth at the end of lap one, and soon picked off Sam Tordoff’s Motorbase Ford on the second lap, with Matt Neal also making his way past Tordoff on the same lap at Lodge.

Turkington then overtook his team-mate Jordan at Lodge a lap later and began to close in on race leader Chilton.

Two laps later, and Turkington made the move for the lead, again at Lodge, while right behind Neal made his way past Jordan for third.

Neal overtook Chilton at Old Hall at the start of lap eight, while Turkington was already building a strong lead.

Sam Tordoff was a key retirement in the final stages, with the Motorbase Ford pulling off the track on lap 12 with an engine fire.

Turkington went on to win the race by five seconds over Neal, with Chilton taking the final spot on the podium

Turkington now leads the championship on 109 points, eight points clear of Adam Morgan, who finished Race 2 in 11th in his Ciceley Mercedes-Benz, with Jack Goff third in the standings, two points further behind in his Eurotech Honda.

The final race of the day takes place at 17:05 BST, with Rob Austin on pole position with the top seven reversed from Race 2.