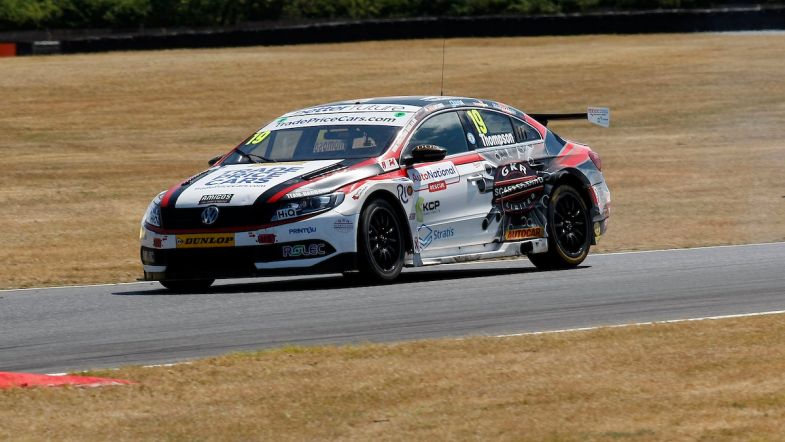 First top ten “feels like a win” for Bobby Thompson

Bobby Thompson admitted he was over the moon to break into the points for the first time during the BTCC’s Diamond Double meeting at Snetterton.

The rookie had endured a tough start to life in the series during the opening half of the year and headed to Norfolk keen to try and push his way forwards up the grid up a weekend where he also celebrated his 22nd birthday.

Having qualified 20th and 28th in the two Saturday sessions, Thompson headed into race day optimistic about his chances and a strong drive in race one saw him pushing forwards towards the points despite an intermittent issue with the wipers on his Volkswagen CC.

Running inside the points, Thompson would miss out on the final lap when he was forced wide by Aiden Moffat at the final corner and was left with work to do in race two when he was late leaving for the grid and had to start at the back of the field.

A solid run through to 14th spot allowed him to score for the first time in the series but the Diamond Double would be the real highlight as the reigning VW Cup champion fought his way to tenth spot by the finish – edging ahead of Ollie Jackson’s Audi on the run to the line.

“I had high hopes heading into the weekend but to come away with two lots of points and my first top ten is just the best birthday present imaginable,” he said. “The car was the best it has felt all year, the tyres always felt like we had grip left in them and I gelled really well with the new members of my crew.

“This feels like a win for me, my family and for my team. The new engineer Timo made some massive changes to the car and I am just grateful to Tony [Gilham] for keeping faith in me. We all know that we weren’t where we needed to be in the first half of the year but it wasn’t because the guys weren’t working hard because they grafted non-stop. Now I feel like I started to repay the sponsors that have put me on the BTCC grid which has been my dream since I was a kid.

“If you had told me I would have my first top ten finish this weekend at the start of the summer break I wouldn’t have believed you but the team have worked so hard and made a lot of changes that we really needed and now I think we can score points in every race.”