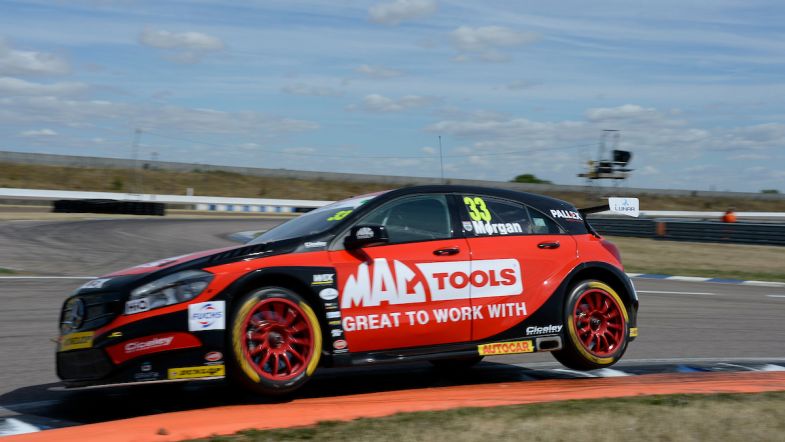 Adam Morgan secured a comfortable third victory of the BTCC season in the opening race of the weekend at Rockingham.

The Ciceley Motorsport driver had qualified on the front row of the grid for the first time in his career during qualifying on Saturday and managed to maintain his lead at the start as the field streamed down to the Deene Hairpin for the first time.

Despite light drizzle falling, Morgan would enjoy a somewhat straightforward race out front and was never seriously troubled after the man who was expected to challenge him – Sam Tordoff – was forced out on the opening lap.

Tordoff would be the big loser as the field dropped off the banking for the first time as he looked to slot in behind Morgan having been tipped into a spin by Dan Cammish’s Honda, with the Focus then collected by Andrew Jordan’s BMW, Matt Neal’s Honda and the Audi of Sam Smelt.

Whilst Tordoff got his car back to the pits, the stricken Audi resulted in the safety car being deployed with light rain then starting to fall. Eurotech’s Brett Smith would gamble on switching to wet tyres but would find himself lapping well off the pace for the remainder of the race with the rain failing to arrive to the extent that a change was required.

Once the safety car came in, Morgan was able to pull away from the chasing pack, with the Motorbase Ford Focus of Tom Chilton acting as the cork in the bottle behind.

It gave him his first victory of the season in a race that didn’t involve a reverse grid.

“It’s always a nice feeling to win from start to finish, I don’t do it often,” he said. “It’s fantastic and thanks to the team who have done a great job with the car. It’s a good start and hopefully there is more to come later in the day.

“My main aim was to lead into turn two and when I did that, I knew I could get the win. I was cautious when the rain came down and a bit wary but then I got the gap on Tom and went for it.”

Chilton would head Cammish’s Honda and the fast-starting Subaru of Ash Sutton for much of the race, with Sutton the man who was eventually able to make a move stick with a dive down the inside at Tarzan having earlier dispatched of Cammish’s Civic Type R.

Behind Sutton in second, Chilton secured third spot ahead of Chris Smiley, who produced a battling drive in his BTC Norlin-run Honda to fight his way forwards to steal the place on the run to the line ahead of Cammish. Mike Bushell rounded out the top six in his Team HARD-run Volkswagen CC.

Seventh looked set to go the way of points leader Tom Ingram but he suddenly slowed to a halt on the final lap in his Speedworks-run Toyota which handed the place to closest rival Colin Turkington – who moves into the points lead in the process.

Aiden Moffat took eighth in his Mercedes with Rory Butcher putting in a strong run in his MG to secure ninth spot, with the top ten rounded out by Matt Simpson’s Honda.

Title hopeful Jack Goff had to settle for 13th spot after a difficult qualifying session, with Jordan recovering from the lap one incident to take the final point in 15th spot. There were no points for Neal however who had to settle for 18th.

Of the three newbies, Ricky Collard in 17th was the best placed finisher, with Glynn Geddie in 22nd. Ollie Pidgeley failed to finish after retiring on lap one.