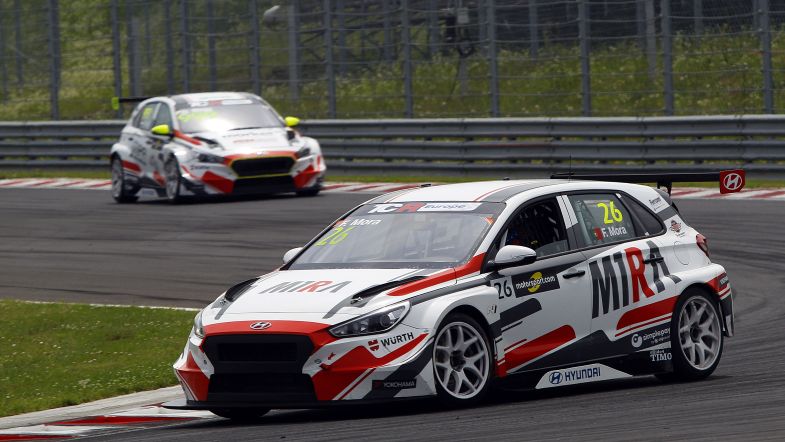 M1RA will run just one Hyundai i30 N TCR at Assen this weekend, after announcing that Portuguese driver Francisco Mora will not take part.

Mora took his maiden TCR victory in Race 2 last time out at the Hungaroring, but will miss the trip to the Netherlands.

His team has not given any reason for the absence, instead opting to put all its efforts behind Hungarian Dániel Nagy who sits third in the standings, just 25 points behind Mikel Azcona.

The team stated: “Unfortunately, our Portuguese driver cannot take part in the Assen round, so this time we’re only fighting with one Hyundai i30 N TCR.

“We had a very successful weekend at the Hungaroring, as Dániel [Nagy] got on the podium in both races, and Francisco [Mora] won M1RA’s and his first victory in 2018.”

The additional focus on Nagy’s car this weekend may prove helpful, with the Hyundai i30 N TCR being one of the heaviest cars alongside the Cupra amid the recent changes to the compensation weight.

The Hyundai will run at 1,305kg at the Dutch circuit, with the ride height of the car remaining the same as in Hungary.

Also missing at Assen this weekend is Hungarian Márk Jedlóczky (JLG Motorsport Cupra). The handball player entered the championship with his own team at the start of the year but has been forced to sit out.

“Despite each effort, we cannot take part in the races of TCR Europe this weekend. We hope we can manage to come back for the next round”, his JLG team said.