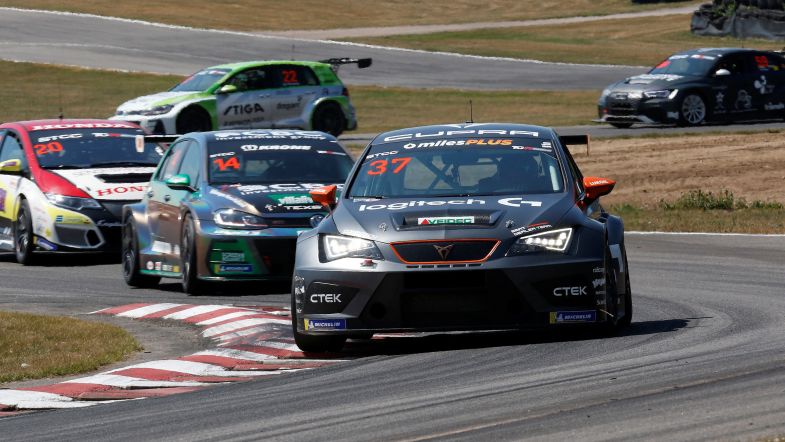 WestCoast Racing say PWR Racing have been “cheating all year”

PWR Racing have had four of their results from the weekend taken away, with Daniel Haglöf, Robert Dahlgren and Philip Morin excluded from Race 1 and Mikaela Åhlin-Kottulinsky from Race 2 after WestCoast Racing having launched the protest which saw the championship leaders kicked out of the race.

The team were found by the officials to be running with a non-conforming exhaust system, with the stewards confirming that the team were excluded from Race 1.

Two hours after the second race, it was also confirmed that race winner Mikaela Åhlin-Kottulinsky was excluded, but the team had managed to fit replacement systems to the other cars meaning the other drivers keep their results from Race 2, with Daniel Haglöf now in effect securing the team’s best result of the weekend with fourth, after they’d initially won both races.

Five-time champions WestCoast Racing had launched a protest following the first race, which saw the chain of events of the weekend unfold.

“There’s a performance advantage from running this. There’s a regulation and we’re running to it, everyone’s running to it, and they didn’t,” said WestCoast Racing team principal Dick Jonsson-Wigroth to TouringCarTimes. “And it’s not the first time PWR have cheated. We’ve been watching them all season just waiting to find out what it was, this is just one of them, there must be more.

“If they’ve run this all year, that just proves they’ve been cheating all year.”

Team owner/driver Daniel Haglöf counters that the cars are perfectly legal, and that the exclusion is more down to an interpretation of the regulations, with Cupra Racing supporting the team’s position.

“We have talked with Cupra and TCR, they say our exhaust is OK,” said Haglöf to TouringCarTimes. “We have the stock Cupra exhaust. They have different options with downpipes, a middle damper and rear dampers, and you can use what configuration you want to get it below the 95 decibels.

“I just called the technical director of Cupra Racing who said ‘What?! That is wrong!” Quite frankly the TCR regulations are not bulletproof, so we will see what happens.

“I know that from Cupra Racing’s side and TCR we have our backs covered. If we get penalised for it, it is because of paperwork. From my point of view, we did not do anything wrong and I hope that we will get the points reinstated.”

The race director of the STCC, Börje Blomén outlined the reason for PWR’s exclusion.

“Our technicians have investigated the exhaust system on the cars and they were found to not be according to the regulations and were therefore excluded.

“PWR Racing has asked to have the exclusion looked at by the Swedish Motorsport Federation disciplinary board, after that there are two further instances to go to.

“We have an image of the exhaust system that is allowed to use in Sweden, and the ones on the PWR Racing cars are not in accordance to them.”