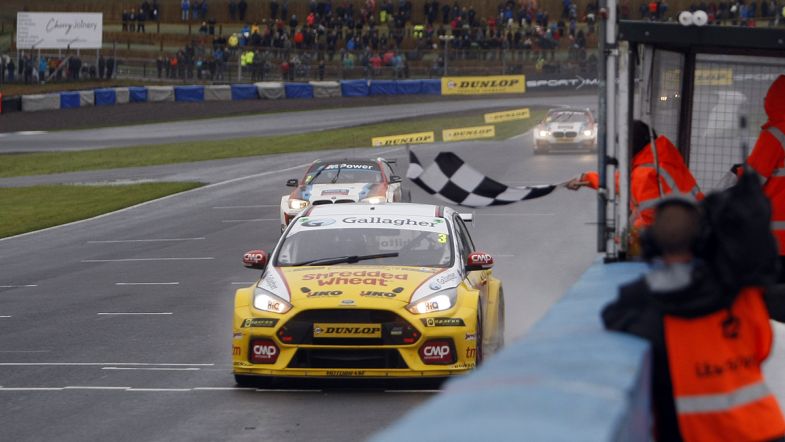 Tom Chilton withstood a charging Colin Turkington to claim his first British Touring Car Championship victory of the season in the final race of the weekend at Knockhill.

The Motorbase driver started from pole position and led from start to finish to head points leader Turkington’s BMW to the line by just under a second.

Turkington’s West Surrey Racing team-mate Andrew Jordan claimed the final step on the podium in third, while reigning champion Ash Sutton finished a remarkable eighth having started from the back of the grid in his Team BMR Subaru Levorg GT.

Race 1 winner Sutton had taken the on-the-road win in the second encounter before being disqualified for failing the ride height check in post-race scrutineering. The Subaru driver made up 22 positions over 27 laps to minimise the damage in the championship to Turkington.

Chilton seized the early advantage on a drying track over Morgan and Turkington, while the fast-starting Jordan jumped past the Power Maxed Vauxhall Astra of Josh Cook into Duffus.

The safety car was called for after the Honda of Matt Simpson and the Team HARD Volkswagen CC of Mike Bushell collected each other at the Hairpin on the second lap, with Bushell’s car ecoming beached on the inside kerbing.

Chilton continued to lead once the safety car came in and held off subsequent attacks from Turkington, who had made it past Morgan on the run down the main straight for second, to claim his and Motorbase’s first success of the season.

Sutton’s recovery through the field begun by leaping past four cars immediately off the line at the start and continued with an assertive move on Matt Neal’s Honda Civic Type R into the Hairpin.

Local driver Rory Butcher had challenged for the bottom step of the podium in his AmD Tuning MG 6 GT, but ultimately tailed off in the closing stages to claim seventh, just ahead of Sutton.

Turkington has now extended his lead in the championship, and is on 269 points, 43 points clear of Tom Ingram, who was only able to finish 16th after starting 31st and last after also having been excluded from Race 2 after failing the ride height check, with the Speedworks Toyota driver just missing out on a points finish.

The next round of the championship takes place at Silverstone on September 15th-16th.