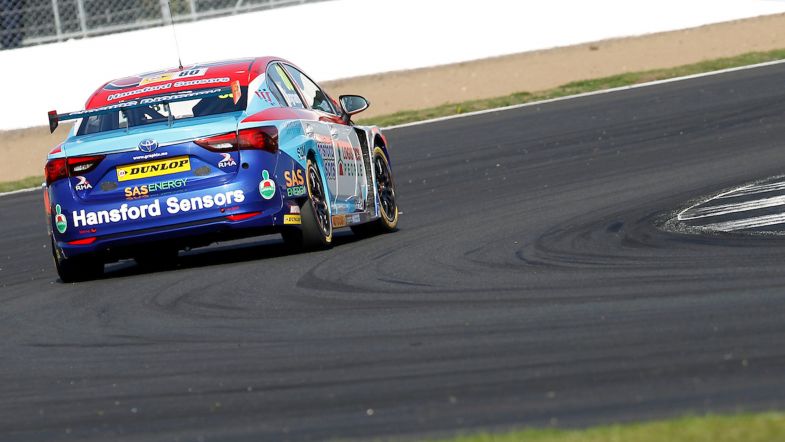 Speedworks Toyota driver Tom Ingram went from 13th to first in the second race of the day at Silverstone, and in doing so closes the points gap in the championship race to Colin Turkington to 36, meaning the title is now certain to be decided at Brands Hatch, and can’t be secured today.

Sam Tordoff and Tom Chilton led the way at the start of the race in their now heavily ballast-laden Motorbase Ford Focus RSs, while Colin Turkington made a strong start from eighth on the grid and was quickly up to sixth in his West Surrey Racing BMW 125i M Sport.

He didn’t hold sixth for long however, as the Ciceley Motorsport Mercedes A-Class of Adam Morgan was on a charge, quickly passing Turkington and then continued to pick his way forwards running with just 33kg of ballast, passing both Matt Simpson and Jack Goff’s Hondas on lap two to move up to fourth.

The two drivers continued to climb up the leaderboard, with Ingram soon on Morgan’s tail as they both passed Ricky Collard’s BMW on lap five.

Two laps later, Ingram then passed both Adam Morgan’s Mercedes and Tom Chilton’s Ford in one move down the Wellington straight to move up to second place, and then closed on Sam Tordoff’s leading Ford, passing him for the lead on lap ten at Brooklands.

Morgan alos picked off Tordoff on lap 15, which set the final podium order, with Tordoff claiming his second podium finish of the year in two consecutive races.

Ricky Collard went on to finish fourth in his BMW, ahead of Matt Simpson’s Honda, with Jack Goff claiming sixth in his Eurotech Honda.

Aiden Moffat finished seventh after passing Colin Turkington’s car with light contact on lap nine, which would prove pivotal, when the reversed grid draw made it so the top seven would be reversed for the final race, putting Moffat on pole.

Turkington finished eighth for the second race in a row, finishing ahead of Rob Austin’s HMS Alfa which had made good progress from the back of the field, with Senna Proctor’s Power Maxed Vauxhall completing the top ten.

Turkington now leads the championship by 36 points over Ingram, with Adam Morgan now third in the standings, 58 points adrift.

Reigning champion Ash Sutton’s championship charge was dented after his car was damaged during the repair window between races, with the team having to change the car’s floor just ahead of the second race meaning he had to start from the pit lane. Sutton could get no higher than 27th position, and drops back to fifth in the standings, and will have to start the final race from 27th as well.