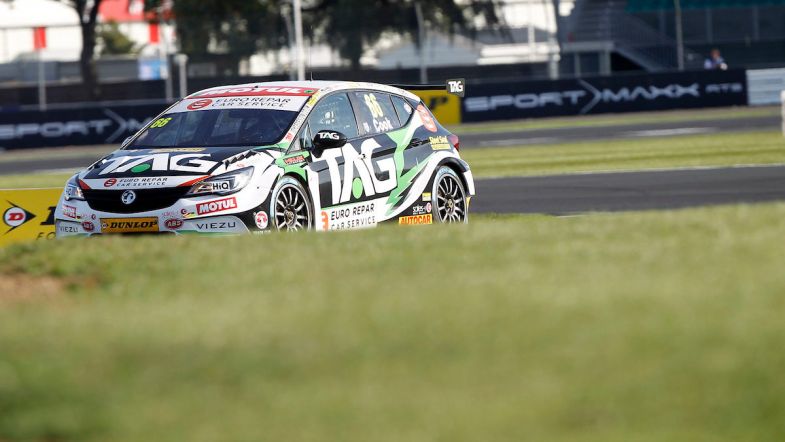 Power Maxed Racing’s Josh Cook rescued a fourth-place finish in Silverstone Race 3 after he was taken out in the first race of the day in an incident with BTC Norlin Racing’s Chris Smiley, which effectively ended his outside championship hopes.

Cook’s car was left beached in the gravel on lap four, while a sterling drive in Race 2 saw him make up 16 places to finish in 12th place, from where he was able to make further progress in Race 3, finishing just off the podium in the team’s Vauxhall Astra.

“We clearly had the pace this weekend, and in Race 2 we just moved forward, picking everyone off one-by-one,” said Cook to TouringCarTimes. “The yellow flags we had in sector one for a few laps really halted our progress a little, else I think we could have been even further up.

Cook was then involved in a tight battle for second position for some laps, fighting West Surrey Racing’s Colin Turkington, HMS Racing’s Rob Austin and Motorbase Ford driver Tom Chilton as they all bunched up behind the leading pair of Aiden Moffat’s Mercedes and Tom Ingram’s Toyota.

“Race 3 was a bit feisty – it was hard racing, but fair. There was nothing too malicious, it was just really hard touring car racing,” he said. “Our drive out of the corners was just amazing, the guys did a great job with a car, bu it’s just not been our weekend for luck.

“We’re close to third in the championship, while up front it’s a two-horse race. We’ve had the car all year, but like anything in this championship you have to have some luck. but we’ve had two retirements through technical problems that were not the team’s fault, and two races where we taken out. There’s been a lot of races where things haven’t gone to plan…but the pace is in the car, so we’re going to go to Brands and try and make sure we get back in the top three.”