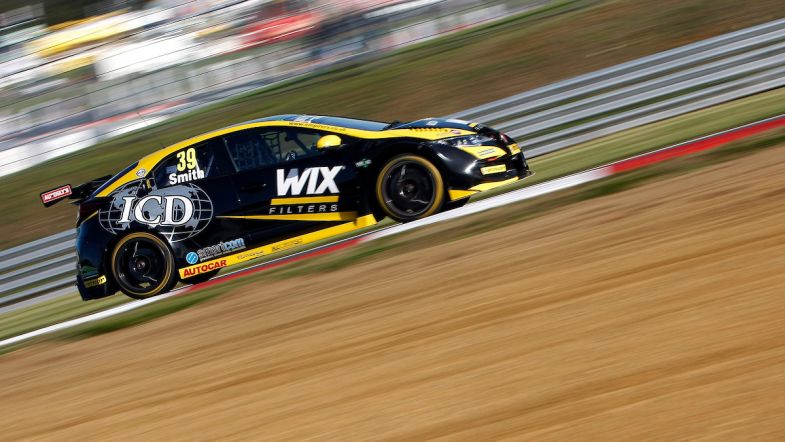 Eurotech Racing’s Brett Smith has taken his maiden British Touring Car Championship pole position at Brands Hatch, heading a quintet of Hondas at the sharp end of the grid, in a session where the title hopefuls found themselves mired in the midfield.

Smith’s best time of 1.30.557, set with six minutes to go in his Civic Type-R, was enough to pip the works Honda of Dan Cammish by 0.043 seconds in the newer FK8 Civic and set a new qualifying record in the process.

But it was a trying session for title contenders Colin Turkington and Tom Ingram, who could do no better than 17th and 19th respectively – a scenario which will suit the West Surrey Racing man much better than his Speedworks Motorsport rival.

Outside title rival Tom Chilton was only marginally further forward in 15th in his Ford Focus ST, but the Motorbase Performance man attracted the the ire of Cammish after seemingly baulking him on his fastest lap.

Behind the first pair of Hondas, Matt Neal was third ahead of Jack Goff, mirroring the Eurotech and Team Dynamics line-up on the front row. Dan Lloyd was next up in his BTC Racing machine, and only a deleted time for exceeding track limits for Chris Smiley prevented the Japanese marque’s cars from locking out the first three rows.

Smiley’s demotion to eighth meant Power Maxed Racing’s Senna Proctor rounded out the top six in his Vauxhall Astra, ahead of Motorbase Performance’s Sam Tordoff in seventh. Behind Smiley, Aiden Moffat and Ash Sutton rounded out the top 10, the latter in a swiftly-repaired Subaru Levorg after his practice off.

Any drivers hoping to improve in the final seconds were denied that chance when Rory Butcher went off in his AmD Tuning MG 6, leading to heavy front-left damage to his car and causing the red flags to fly within the final minute.

It meant the grid was set – and the main title protagonists will have to come through the field tomorrow. The result was a definite save for Turkington, who pipped Ingram by 0.060 in his BMW 125 i and recovered from having an early time deleted, which had left him in 26th place.

For his part, Ingram completed 13 laps which lacked nothing in commitment, but were lacking in ultimate speed with second-placed ballast on board.

Despite their lowly grid positions, the pair were both still less than 0.7s from Smith’s pole position lap.

The first race of finals day takes place at 11.35 BST tomorrow, over a 15-lap distance.