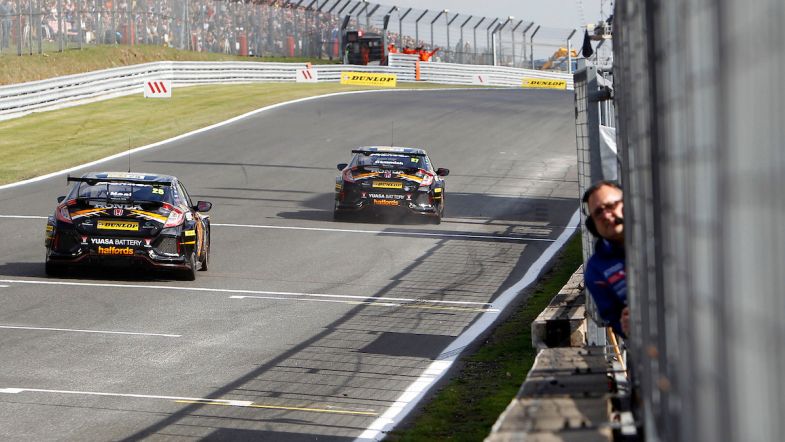 West Surrey Racing’s Colin Turkington has been crowned as the 2018 BTCC champion despite finishing only 22nd in the second Brands Hatch race, which was won again by Team Dynamics’ Dan Cammish.

Turkington struggled throughout the race in the mid-pack melee and ended up in the gravel at Paddock Hill Bend after making contact with BTC Racing’s Dan Lloyd on lap 13, dropping out of the points in the process.

But Speedworks Motorsport’s Tom Ingram could only make it through to fourth place despite a trademark charge in his Toyota Avensis, meaning he couldn’t close the gap under the 22 points required to take it to the final race.

Turkington is now provisionally a three-time champion, following up his title successes in 2009 and 2014.

For his part, Ingram’s consolation prize of a second successive independents’ championship was confirmed by beating his closest rival, Motorbase Performance’s Tom Chilton.

In a dramatic, safety car-affected race, Cammish delivered a textbook drive on full ballast to hold off team-mate Matt Neal for a second Team Dynamics one-two of the day, while Turkington’s team-mate Andrew Jordan held off Ingram to take the final spot on the podium.

Aiden Moffat had a strong run to fifth in the Laser Tools Racing Mercedes A-Class, with Chilton, Senna Proctor, Ash Sutton, Rob Austin and Josh Cook completing the top 10. Cook also benefited from the reverse grid draw and will line up on pole for the final race of the season.

Cammish held the lead at the start as Jordan rocketed through to fourth, with both Turkington and Ingram making up places.

Ingram then divebombed Turkington with a fantastic move at Paddock Hill Bend on lap two and, by the end of the lap, the delayed BMW had also been passed by Rob Austin, Tom Oliphant and Sam Tordoff.

An incident at the rear of the field on lap four removed AmD Tuning’s Rory Butcher, Team Parker Racing’s Stephen Jelley and Team Hard’s Ethan Hammerton at Surtees before the safety car was deployed on lap six.

Ingram continued his charge after the safety car pitted, but he came up against a staunch defence from Jordan, who himself was trying to pass Neal’s Honda Civic.

Ingram went for it at Surtees with two laps to go but Jordan held firm, meaning Turkington carries an unassailable lead into the final round of the season.