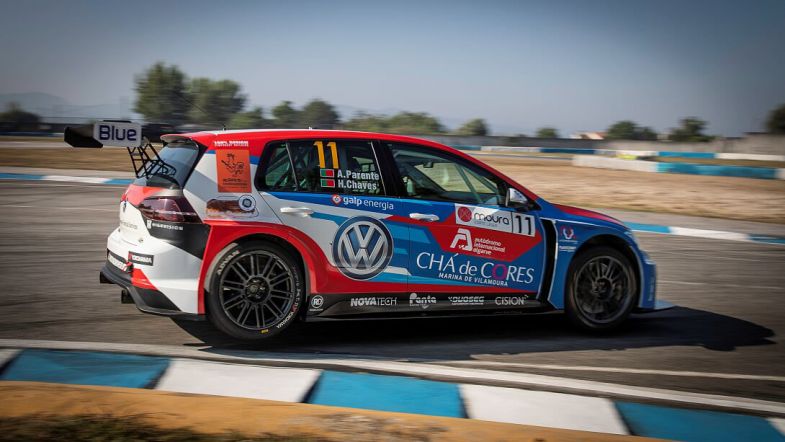 Armando Parente takes his second victory of the season at Portimao

Team Novadriver’s Armando Parente, at the wheel of a Volkswagen Golf GTI TCR, took his second victory of the season at Portimao in the first race of the 2018 TCR Portugal series season finale.

Francisco Abreu, driving a Peugeot 308TCR, took the lead at the start, followed by Parente and Carvalho (Audi RS 3 LMS), with Gustavo Moura, in the second of the Audis, in fourth place.

Pedro Salvador took the easy approach at the wheel of his Cupra TCR and, given that just taking part in the races at Portimao will give him the title, completed four laps which was enough to be sixth – and last – in the TCR class.

Parente overtook Abreu for the lead on lap four, with the reigning champion keeping a tight watch on the leader for the remainder of the race, with Carvalho close in third. Parente opened a gap over Abreu, with Carvalho pressing the Peugeot driver until the last lap, overtaking for the second place in the closing stages of the race.

Parente took his second victory of the season, accompanied by Carvalho and Abreu on the podium.

Manuel Giao, at the wheel of his Kia Cee’d TCR, was fourth, ahead of Gustavo Moura’s Audi RS 3 LMS.

Ahead of Sunday’s final race of the season, Salvador leads the standings with 153 points and is the virtual champion, but now the focus is on the battle for the runner up spot, with Carvalho in second place with 123 points, the duo formed by Abreu and Rafael Lobato just one point behind and Parente with 109 points in his account.