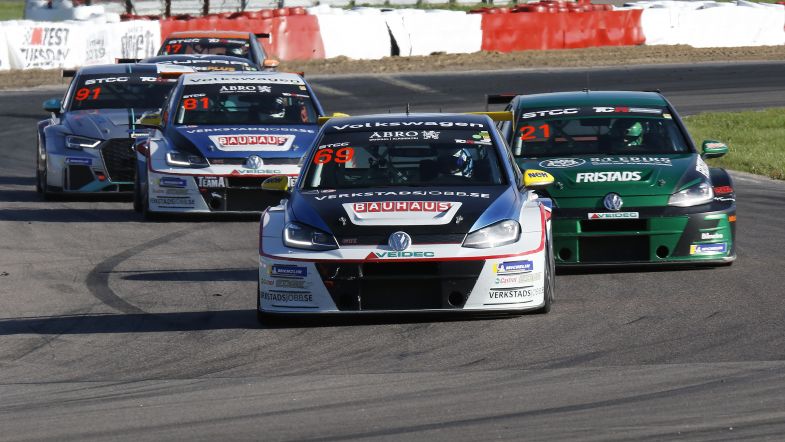 The company of the Scandinavian Touring Car Championship (STCC AB) has declared bankruptcy ahead of the 2019 season, although the championship is set to continue with a new body taking over the reigns.

STCC AB made the announcement citing “turbulent years following the financial crisis” and revealed that “conditions to move the operations forward” no longer existed.

That comes despite the fact that the STCC was the fourth largest TCR series in the world last year, with a healthy grid of 23 drivers and cars competing over the course of the season.

Whilst that led to a “positive trend in terms of financial results in 2017 and 2018”, it wasn’t enough to secure STCC AB as a company, leading to the decision to declare bankruptcy.

Following the announcement, a new group created between the Swedish Motorsport Federation (SBF), TCR Scandinavian Series AB and the circuit owners will work together to secure a championship for 2019, which will kick off as planned at Ring Knutstorp in early May.

“For us, it is about focusing forward,” Anna Nordkvist, managing director of SBF, said. “Swedish racing holds a high class compared to other championships around the world and will continue to do so. That is why the Swedish Motorsport Federation, TCR Scandinavian Series AB and the racing circuits will act together.

“We are together going to secure that we have a championship season for 2019 and continue to develop Swedish racing for the coming years. There is so much knowledge and love for the sport from the teams, sponsors, circuits, marshals, fans and we want to continue strengthening that.”

STCC AB was founded in 1996 and has since then been one of the strongest touring car championships in Europe, with drivers like Mattias Ekström, Thed Björk, Fredrik Ekblom and Johan Kristoffersson and teams including Kristoffersson Motorsport, Flash Engineering, WestCoast Racing and Cyan Racing all competing.

Despite the collapse of the company, Fredrik Sjöqvist – spokesperson for the circuit owners and managing director of the circuit Mantorp Park – said he felt there was a bright future for the series and that there would be no change from a circuit perspective.

“The STCC has been a good event for the circuits for a long time,” he said. “With the new TCR regulations and the teams, plus the all other classes that have grown, there is definitely a bright future. This means no major difference for us as organisers. That there is a co-operation with a strong group means that there are possibilities to further develop the race weekends.”

“With this new co-operation for the championship, we are together forming a new future for Swedish racing and I am convinced that we are going to succeed this year, but above all secure and continue develop a strong base for the coming years,” he said. “Swedish racing holds a high standard compared to the rest of the world and we have extremely skilled teams and organisers around the country. The Swedish championship of touring car racing is the strongest motorsport championship in Scandinavia and shall so remain.”