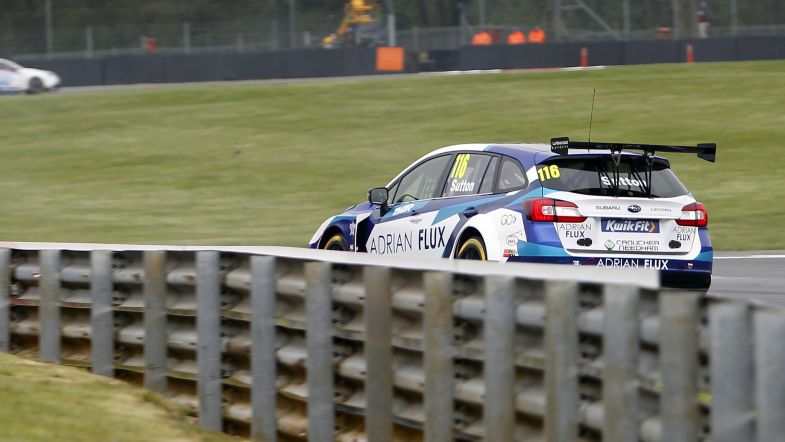 Ash Sutton topped the times in a qualifying session hit by three red flags to secure the first pole of the BTCC season at Brands Hatch.

Sutton made the most of damp conditions on track to snare top spot at the wheel of his Subaru Levorg; something which had looked in the dry conditions that greeted drivers during free practice earlier in the day.

The former champion hit the front after the first stoppage of the session, caused by Ollie Jackson putting his Motorbase-run Ford Focus off at Clearways, setting a time of 53.602s that would ultimately prove to be good enough for pole as light rain affected the latter part of the session.

After a second red-flag, caused this time by Sam Tordoff going off at Druids, Sutton remained out front but there were changes behind as his former team-mate Jason Plato jumped up to second in his Power Maxed Racing Vauxhall.

That allowed Plato to edge out Colin Turkington from the front row, with the defending champion missing out on second by just 0.004s in the best of the new BMWs.

Tom Oliphant, who had topped second practice in the sister Team BMW-entered car, looked good for a front row start for much of the session but ultimately had to settle for fourth spot which still marks his best qualifying result to date in the series.

Honda pair Matt Neal and Dan Cammish share row three of the grid with Tom Ingram a solid seventh ahead of the first race for the new Toyota Corolla.

Stephen Jelley, Andrew Jordan and Tordoff round out the top ten; the latter despite falling foul of the new rules that mean a driver causing a red flag loses their best time in the session.

Elsewhere, Nicolas Hamilton was the of the rookie drivers in 21st place and outqualified race winners Adam Morgan and Aiden Moffat in the process, whilst former F1 racer Mark Blundell qualified down in 29th having also lost his best time after causing the third red flag of the session.