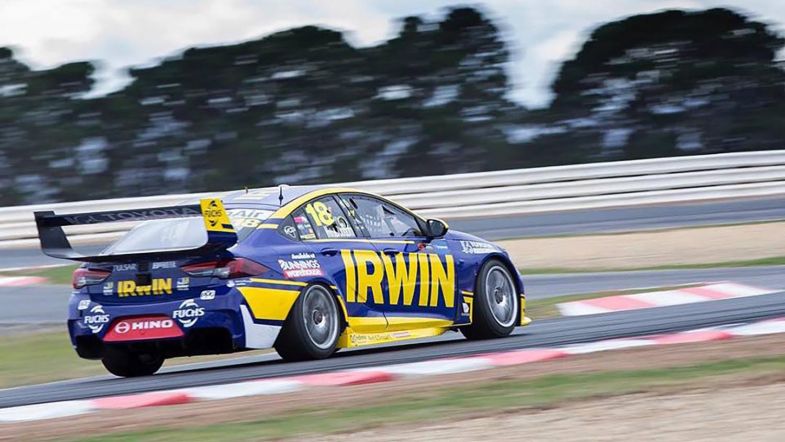 Mark Winterbottom stormed to his first pole position since the 2016 Supercars season in a stunning elimination qualifying session at Symmons Plains.

The Irwin Racing driver, who switched to the single car team this year after a long tenure at Tickford Racing, was fast throughout qualifying to edge out championship leader Scott McLaughlin’s Shell V-Power Ford by 0.0040 seconds.

“I’m so proud of the guys. They’ve worked so hard and they’ve been building. It’s really nice. I came here (to the team) because I saw a good opportunity and I’m loving working with this team. When you do things like this you see the emotion and what it means – They’ve never had a pole before. It’s a special day and I’m proud to be part of it.”

Remarkably, Friday’s fast man Jamie Whincup will start last after spinning into the gravel trap and out of contention in the middle segment of qualifying, taking no further part in the session.

Qualifying for race 7 was the first time the series has used the three-part elimination format this season: the top-10 fastest cars from practice two on Friday having progressed directly to qualifying two.

Of the 15 cars that took part in the first 10-minute segment, Slade, Holdsworth, Waters, de Pasquale and Percat progressed to round two.

Remarkably, Scott Pye, who ultimately qualified 16th, missed the cut despite setting an identical lap time to Percat to the ten-thousandth of a second. Despite both drivers banking an identical 52.0200s lap, Percat progressed due to setting his lap first.

The 15-minute qualifying two started with a bang as Jamie Whincup spun into the gravel at turn four on his first flying lap; bringing out the red flag.

The seven-time champion lost his fastest time and was ruled out from completing the session, relegating him to the rear of the field for race 7.

“I locked the rears under brakes,” Whincup told Fox Sports. “There’s not much runoff and I tried to spin the car around but got in the dirt. It was a small error but a costly mistake. We pretty much had a race car there but it compromises us starting at the back.”

Mostert, on pole for race six in the championship in Melbourne, fell 0.03s from making the third and final part of qualifying.

Just 0.28s covered the 10 cars that progressed to the final 10-minute shootout for pole position, comprised of Six Holden and four Ford entries.

Van Gisbergen then topped the early part of qualifying three, holding point just 0.04s faster than Winterbottom after the 10-fastest cars had completed their first run.

At that point Scott McLaughlin was just 10th, having aborted his first run after falling off the road at turn six on his first flyer.

Winterbottom jumped to the top on his final flying lap, his 50.6920s coming with a mighty final sector of his last lap, while McLaughlin’s sole flyer saw him fall 0.004s short to grab second place.

Slade, Waters and Holdsworth ran only once in qualifying three, electing to save tyres after having banked one flying lap.

Rick Kelly ultimately qualified 17th after being forced to change an engine after dropping a cylinder during the earlier third practice session.

The entire field will be held in parc ferme conditions between qualifying and the seventh race of the championship for the first time in series history.