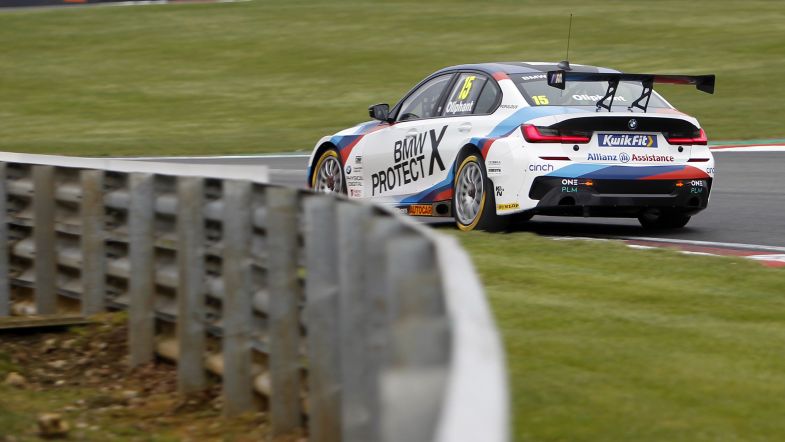 Tom Oliphant headed a 1-2-3 for the new BMW 330i M Sport in the second free practice session ahead of the BTCC season opener at Brands Hatch.

In his first weekend as part of the West Surrey Racing line-up, Oliphant led the way in a session that was affected throughout by light rain that prevented the field from lapping as quickly as they had earlier in the day.

Oliphant set his best time early on ahead of Jason Plato’s Vauxhall Astra, but it was fellow BMW racers Andrew Jordan and Colin Turkington who would slot into second and third after improving their best times right at the end of the session.

That was when the circuit conditions were arguably at their best, with improving weather and a brief red flag after Aiden Moffat went off at Paddock Hill Bend resulting in a scramble for the quickest laps in the final five minutes.

The late improvements for Jordan and Turkington resulted in Plato dropping down to P4 as the best of the front-wheel drive cars, with the Ford of Tom Chilton and Tom Ingram’s Toyota rounding out the top six.

Jake Hill was a solid seventh in the Trade Price Cars Racing Audi, with the top ten completed by the Hondas of Dan Cammish and Sam Tordoff, and the Focus of Ollie Jackson – which split the two Type Rs on the times.

Elsewhere, Ash Sutton was twelfth in the best of the Subaru Levorgs, with Matt Neal in the second of the Dynamics Hondas in 16th.

Ex-F1 man Mark Blundell was best of the rookies in 22nd place, whilst Josh Cook ended up bottom of the times having called time on his session early to allow BTC Racing to deal with an electrical issue on his car.