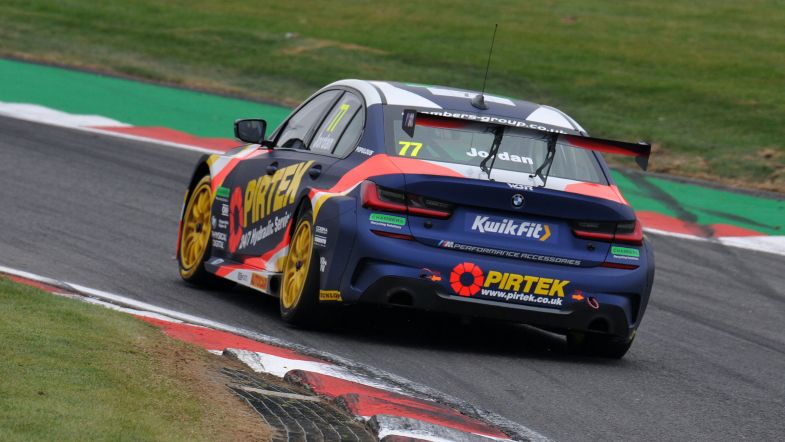 Andrew Jordan romped to a stunning victory in the new West Surrey Racing BMW 330i M Sport in the second BTCC race of the weekend at Brands Hatch.

Jordan had started the race down in 15th place on the grid after the wet season opener but showed frightening pace throughout in the new car to storm through the field and secure his first victory of the year.

A fine opening lap saw the 2013 champion quickly up into the top ten and having worked his way through into third by lap nine, he locked onto the rear of the Subaru of Ash Sutton as the duo set about chasing down race one winner Josh Cook.

Jordan tried on more than one occasion to get ahead of Sutton into Paddock Hill Bend, but the Subaru man was able to slip inside Cook at Graham Hill Bend to get the lead – only to see Jordan follow him through.

Sutton did his best to hold on but Jordan’s pace was such that he was able to blast past going across the start-finish line going into the 17th lap and then simply drove ahead from Sutton behind; making the most of being on the more favourable prime tyre.

Jordan took victory by more than nine seconds as Sutton came under increasing pressure from Adam Morgan’s Mercedes and the Audi of Jake Hill, with Sutton managing to hold off Morgan on a drag race to the line for his first podium finish of the campaign.

Morgan took third with Hill close behind, with Tom Ingram edging out the BMW of Stephen Jelley as five cars crossed the line covered by three tenths of a second.

Having led the race through the early stages, Cook dropped back as the combination of soft tyres and extra ballast worked against him, although seventh place was still good enough to ensure he retains the championship lead over Hill by a single point.

Rory Butcher took eighth in the first of the Cobra Sport AmD Hondas, with the top ten completed by Tom Chilton and Senna Proctor.

Outside the top ten, Matt Neal and Dan Cammish finished line astern in eleventh and twelfth, with Colin Turkington and Tom Oliphant both managing to score with the other two new BMWs.

There were no points however for the likes of Sam Tordoff and Jason Plato after they have been forced to start from the back after their race one issues.