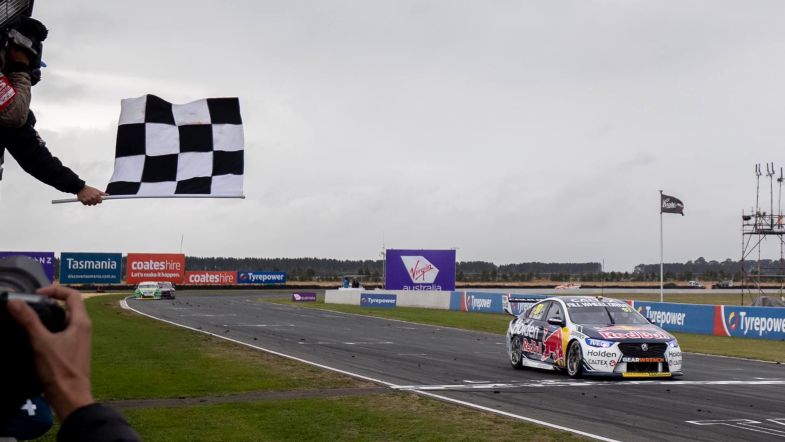 Empire strikes back as Triple Eight take first win of 2019

Shane van Gisbergen emphatically delivered Holden their first victory of the 2019 Supercars Championship, leading a majority of the 200km distance to win race eight of the season at Symmons Plains.

The New Zealander started from pole and then handily won a wheel-to-wheel battle with Fabian Coulthard immediately following his second pit stop to secure the 32nd win of his career.

Light rain late in the race failed to stop van Gisbergen’s charge as he ultimately beat Coulthard by over five seconds, David Reynolds securing third position after he passed championship leader Scott McLaughlin in the final stanza of the race.

Jamie Whincup rebounded from an otherwise challenging weekend to race his way from thirteenth to fifth at the line.
Van Gisbergen entered the weekend eleventh in the championship after a horror weekend at the Grand Prix in Melbourne, however third and first across Tasmania’s two races saw him storm back to fourth in the standings.

“It’s good to get one back,” van Gisbergen told Fox Sports.

“Fabian was getting out of the pits and we had a great battle with he and Scotty. I took off at the start and he (Fabian) got right back to me but he burned his tyres up. Once I knew our tyre life was OK we were all good.

“It’s been a mega week to bounce back from our shocker last time out.”

The race started in cold, blustery conditions and after a period of light rain that swept across the circuit, though the entire field commenced the race on slicks.

Van Gisbergen redeemed his slow race 7 start with a perfect launch, comfortably leading Coulthard on the opening lap. Reynolds, meanwhile, was slow away and lost ground to Winterbottom and McLaughlin in the rush through turn 2.

The Red Bull Commodore edged away from Coulthard in the early stages, while McLaughlin was unable to pass Winterbottom for third. McLaughlin was ultimately the first of the contenders to stop on lap 14, going out of sequence with those around him to run in clear air.

His stop triggered several of the top-10 contenders to take service, though the leaders remained out.

Coulthard pitted from second on lap 23, losing track position to McLaughlin who benefited from the undercut and time running in clear air. However, he would re-pass McLaughlin four laps later as the pair managed their different strategies.

Van Gisbergen and Reynolds pitted from first and second on the 29th lap, the former emerging into the path of Coulthard who had stopped six laps earlier.

Coulthard won that battle, allowing McLaughlin to then attack the Holden for second place.

He slipped past at the hairpin, setting up a wheel to wheel dice through turn five and six which he won. Van Gisbergen, however, wasn’t done yet and executed a perfect over-under move to re-take the spot as the cars raced past the line, ultimately pulling away and setting out after Coulthard in front.

As the race order refreshed, Coulthard built a solid lead over van Gisbergen and McLaughlin, with Reynolds and Winterbottom – longer fuel stop dropped him into the middle of a furious battle for fifth place – next.

The Holden wasn’t done yet, however, with van Gisbergen closing in on and ultimately slipping past Coulthard for the lead on the at turn six on lap 43, before gradually extending his lead as the field raced towards the final round of stops.

Those came on lap 55 for Coulthard and one lap later for van Gisbergen – the pair maintaining their relative positions through their final service for fuel and tyres.

McLaughlin and Reynolds emerged third and fourth, respectively, however the Penrite Racing Commodore would soon slip past the championship leader on the run into turn six to set himself up for his first visit to the podium this year.
Winterbottom was the last of the key contenders to stop; pitting from the lead and resuming in fifth place – only to be immediately passed by the recovering Jamie Whincup when he ran wide at turn four on cold tyres.

Whincup had progressively worked his way forward in the early stages and both strong pace and strategy saw him emerge in the top five once the stops were completed.

The pair battled for the remainder of the race, though Whincup was able to gently pull away from his long-time rival in the closing laps to secure fifth.

Behind Winterbottom, Nick Percat made up nine positions throughout the 84-lap race to finish seventh, while Scott Pye was another big mover: working his way from 15th to eighth.

James Courtney followed his Mobil 1 Mega Racing teammate home in ninth while Lee Holdsworth and Chaz Mostert snuck into the top-10 to score some points in their Tickford Mustangs.

Anton DePasquale had looked grab another top-10 finish however his chances were ruined when his gear selector broke 12 laps from home, jamming his car in gear; the second-year driver ultimately limping home in 24th position.

McLaughlin now leads the championship by 124 points, while Fabian Coulthard moves to second behind his teammate.

The Supercars series resumes in less than a week as the series moves from the equal shortest track on the calendar to the fastest: the fourth event of the season coming next weekend at the Phillip Island Grand Prix Circuit in Victoria.