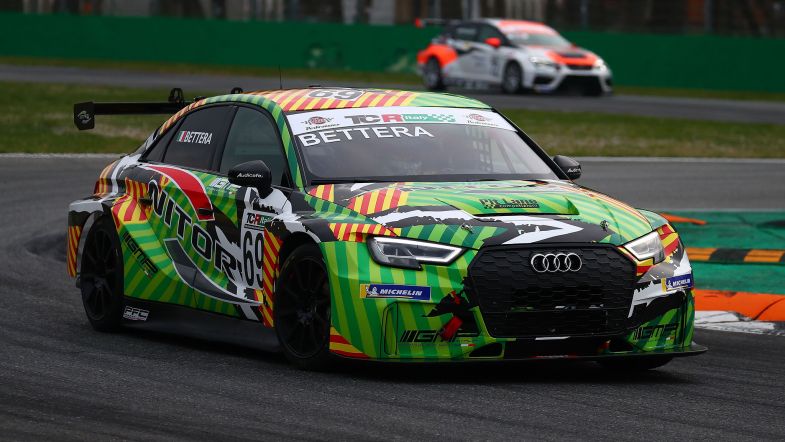 Enrico Bettera wins the second race of the weekend at Monza

Pit Lane Competizione’s Enrico Bettera at the wheel of an Audi RS 3 LMS scored his first victory of the year in an incident-packed second TCR Italy championship race at Monza.

Team Wimmer Werk MS’ Felix Wimmer started from the pole position due to the reverse grid rule but Target Competition’s Marco Pellegrini Anatrella moved his Hyundai i30 TCR before the lights went out, hitting the brakes and losing several positions at the actual start. The Italian would receive a drive-through penalty for the incident.

Wimmer kept the lead but came under fire from Massimiliano Mugelli, at the wheel of the Alfa Romeo Giulietta TCR and looking to fight back from a retirement in the opening race on Saturday. Bettera, who started from eighth place on the grid, was also recovering positions.

Mugelli overtook Wimmer for the lead at the second chicane on lap two, with the Austrian trying to recover the lead as South Italy RT’s Andrea Argenti closed the gap to the fighting leaders.

Soon Wimmer was defending from Argenti, with yesterday’s winner Klim Gravilov in Audi RS 3 LMS, joining the duo as the three went side-by-side through the Parabolica on lap three. Both overtook Wimmer at Turn 1 on the following lap.

Gavrilov attacked Argenti at the Parabolica but didn’t see Bettera, who took the Russian’s inside to climb up to third place at Turn 1 on lap five. Gavrilov tried to retake the position at Ascari, hitting the kerbs and losing two positions, with Bettera now coming under fire from Tavano.

Bettera was able to take second place at the start of the sixth lap, and started to close the four-second gap to the leader, pulling Tavano, Gavrilov and Scuderia del Girasole’s Matteo Greco with him.

Mugelli was under attack from Bettera at Ascari in the seventh lap, with the Audi driver taking first position at Parabolica. Gavrilov tried to take advantage of the situation, but hit Mugelli and Greco, with the Cupra spinning on the track, and Mugelli falling to fourth position. The safety car was called into action to recover Greco’s car.

After two laps, the race was relaunched with three minutes plus one lap to go, with Bettera keeping the lead ahead of Tavano and BF Motorsport’s Jacopo Guidetti, who overtook Argenti at the restart by jumping over the kerbs and would receive a five-second time penalty for a dangerous move.

Tavano challenged Bettera for the lead, but it was the Audi driver who scored his first victory of the season, ahead of Tavano and Guidetti, who was still able to maintain the position despite his time penalty.

Pellegrini Anatrella was fourth followed by BF Motorsport’s Matteo Bergonzini, who had also got a five-second time penalty for cutting a chicane.

After the first round of the championship, Tavano leads the standings with 30 points, followed by Guidetti and Bettera, tied with 21. Gavrilov is fourth with 20.

The next round of the TCR Italy championship takes place at Misano, from the 17th to the 19th of May.