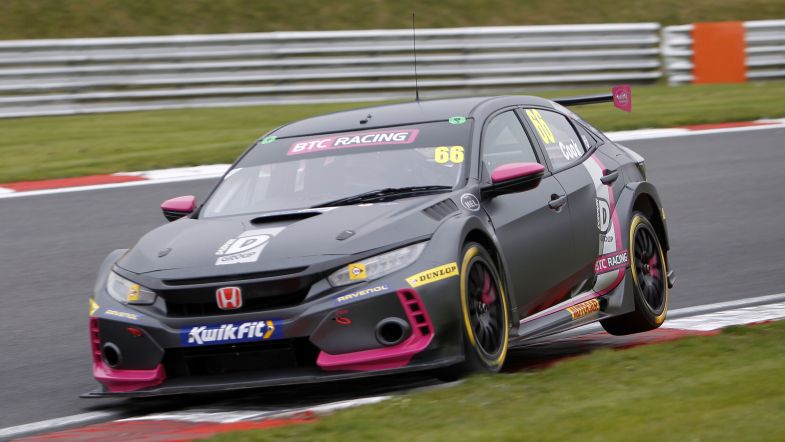 Josh Cook made the most of a call to run slick tyres in mixed conditions to romp to victory in the opening round of the BTCC season at Brands Hatch.

Light rain and fog ahead of the start left teams with a gamble over which tyres to fit, with the leading runners all electing to go with wet rubber but a number further down the pack taking the decision to run on slicks.

When the lights went out, pole sitter Ash Sutton held the lead from the three fast starting BMWs behind as Jason Plato slipped back to sixth spot on the opening lap but it soon became apparent that the wet tyres were the wrong call.

Within three laps of the start, Cook – who had started from tenth and slipped back a few places on lap one – was charging his way back through the pack and by lap eight, was running well inside the top ten.

Starting lap nine in fifth, Cook simply drove past the cars ahead and when he came back round to start lap ten, was into a lead that he wouldn’t lose.

At one stage nearly nine seconds clear, the BTC Racing man saw his lead slashed in the closing laps whilst dealing with traffic, which included a scare when he made contact with Nic Hamilton’s Focus at Druids three laps from the end.

However, the former PMR racer secured victory in the opening race for the team with the new FK8 Honda Civic ahead of Jake Hill’s Trade Price Cars Audi.

As was the case twelve months ago, Hill benefitted from also fitting slicks as he charged through from 15th on the grid on his slick tyres to secure a second career podium, with Tom Chilton coming from 13th place to take third.

Outside the top three, the big battle in the race would be over fourth between the two Mercedes A Class cars of Adam Morgan and Aiden Moffat, and the Volkswagen of Bobby Thompson.

Having worked their way through the wet runners, Morgan and Moffat would dice hard for the place before Moffat eventually secured the place, with Morghan settling for fifth as he just beat Thompson – who snared fastest lap – to the line.

Stephen Jelley came from dead last after his exclusion from qualifying to taken seventh ahead of Matt Neal, who was first driver home on the dry tyres; albeit more than 40 seconds behind the winner.

Dry tyres also helped Jack Goff, Michael Crees and Mark Blundell to come through to the points, but it would prove to be tough for WSR – with Andrew Jordan in 15th the only one of the three BMWs to score.

Colin Turkington and Tom Oliphant would end up a lap down in 19th and 22nd, with Plato also a lap down in 25th having had to serve a drive through penalty and having then lost time swapping to dry tyres.

Sam Tordoff and Chris Smiley were amongst the retirements, with Tordoff pulling on early on and Smiley going off into the barriers on the exit of Graham Hill Bend.