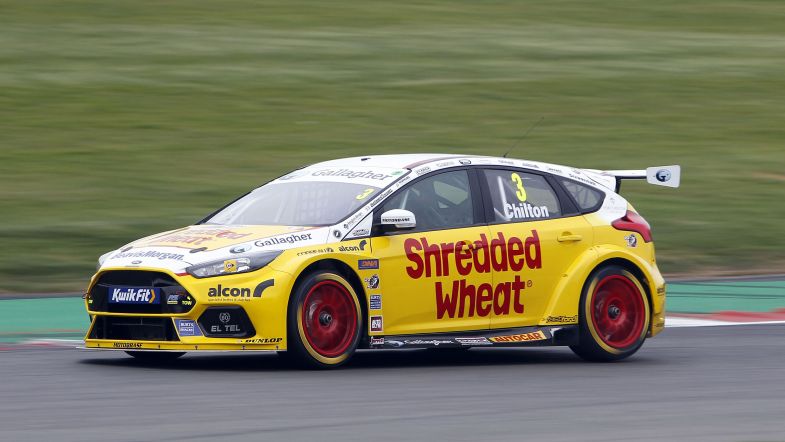 Tom Chilton ensured there would be three different winners from the BTCC season opener at Brands Hatch with victory in the final race of the weekend.

The Motorbase driver had started the race from third on the grid as a result of the reversed grid draw and held station in the early part of the race before finding a way ahead of Stephen Jelley – who had rocketed off the line at the start to climb up to second.

Catching up with the Honda of leader Matt Neal, Chilton made his move at Clearways on the 13th lap and was then able to ease away at the front of the field as Neal slipped back towards the chasing pack.

Neal – running the less favourable soft tyre – would be forced to fight hard to keep Jelley at bay, with contact between the pair at Graham Hill Bend allowing Rory Butcher behind to sneak through from fourth into second; the Cobra Sport AmD man having started the race from fourth on the grid.

As Butcher scampered away to try and chase down Chilton, Neal defended to keep Jelley at bay right through to the start of the final lap when the rear suspension on his Honda led go going through Paddock Hill Bend.

That allowed Jelley to get through into third spot to secure a first podium for Team Parker, with Neal someone dragging the car to the end of the race and still secure a top ten finish.

As Neal nursed his car home, Josh Cook inherited fourth spot for BTC Racing to cement his place as championship leader heading away from Brands Hatch, fending off Colin Turkington as he took his best result of the weekend in his BMW with fifth – just ahead of team-mate Tom Oliphant.

Amnongst those to hit issues, Jake Hill and Ash Sutton were involved in a clash exiting Druids whilst running inside the top six that would force Sutton to put and led Hill to retire, whilst Rob Collard also failed to finish after a hit from Carl Boardley damaged his Vauxhall Astra.