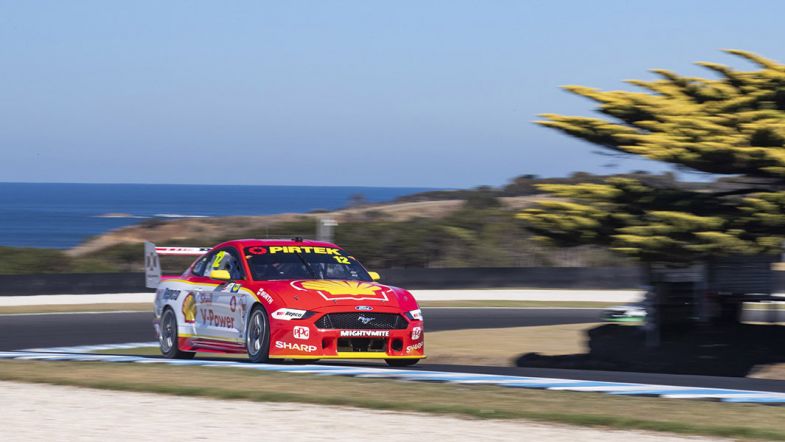 DJR Team Penske driver Fabian Coulthard secured his spot in tomorrow’s second qualifying session by putting himself to the top of the timesheets ahead of team-mate Scott McLaughlin in Friday’s second Supercars Championship practice session at Phillip Island.

With the knockout qualifying being implemented for the second round in a row, the top ten drivers advanced through to the second qualifying session ahead of tomorrow’s race, with the bottom 15 having to fight it out to promote themselves into the battle for the grid.

Coulthard’s lap came in the dying minutes of the half hour long session, just getting up ahead of McLaughlin by 0.006 seconds. Tickford Racing’s Cam Waters was third fastest, capitalising on the speed which saw him top the pre-season test day.

Rick Kelly put his Nissan Altima amongst the top runners, ending the session in fourth while Will Davison seemingly bounced back after a hard round at Symmons Plains to complete the top five.

There were some surprising results at the end of Friday, mainly with Jamie Whincup ending up outside the top ten in both sessions. 23rd in the first session was far from what the Triple Eight driver had hoped for, improving to 11th in practice two but only just missing out on the top ten by under a tenth from team-mate Shane van Gisbergen.

Another omission from the ten in practice two was Erebus driver David Reynolds, ending up nearly a second off the pace of Coulthard and having to fight his way out of qualifying one tomorrow.

Despite Erebus missing out on half of the pre-season test due to exceeding noise limits, the lack of running compared to the rest of the field at Phillip Island didn’t hurt Reynolds’ team-mate Anton De Pasquale who managed to end up on top in practice one, followed by making the top ten in practice two, ending seventh.

Both Brad Jones Racing cars of Nick Percat and Tim Slade as well as the Walkinshaw Andretti United pair of Scott Pye and James Courtney couldn’t squeeze into the ten on Friday, making their jobs harder tomorrow.

Todd Hazelwood was the hero of the “Friday Grand Prix”, the 2017 Super2 champion and second year driver for Matt Stone Racing was able to put his ZB Commodore up into eighth place, ahead of anyone else in a Triple Eight built chassis.

One solitary 30 minute practice session will allow teams to dial their cars in for qualifying tomorrow morning at 10:40am local time, with qualifying beginning at 1:15pm. The three sessions will be separated by five minute breaks before the main, 27 lap race gets the green flag at 3:50pm.