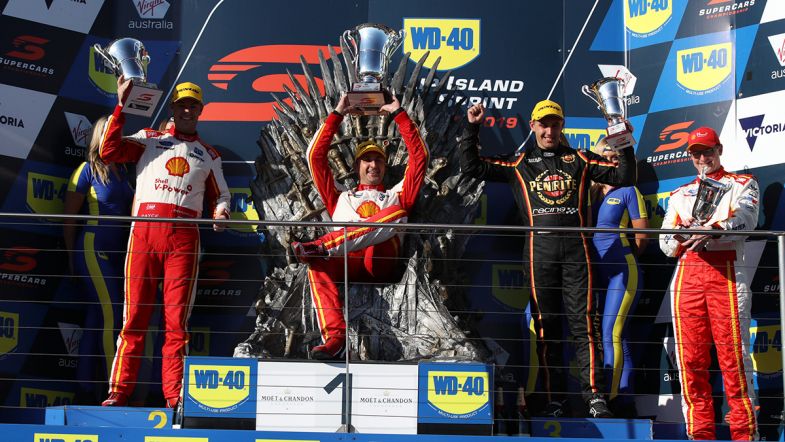 Supercars Championship Race 10 winner Fabian Coulthard has praised the efforts of his team to get him onto the top step of the podium for the first time this year.

The DJR Team Penske driver converted a front row start to victory after qualifying second next to team-mate Scott McLaughlin before the race, wanting his first victory of the season.

A strong race car and good strategy saw Coulthard end up in front after the first round of pit stops where he stayed until the checkqued flag, giving him his first victory since Winton 2018.

Speaking after the race, Coulthard talked about the important effort his team had made to get him up to and past McLaughlin this year.

“It’s always hard to get the first one,” he said.

“Any year, trying to just get one under your belt is tough and I’ve got a class team-mate, simple as that; to take one off him is hard work at the best of times.

“I’m happy for my guys; it’s been a long couple of weekends on the road, being Queensland based and with Tasmania last week and Phillip Island this week.

“It’s a massive team effort, we’re nothing without our team. They work hard back at the shop, as I said they’ve been away from home for two weeks.

“We were lucky that after Tasmania, we had minimal work to do and could focus on setting the car up for here. Everyone works so hard; #12 guys, #17 guys, they work as hard as each other and as I say, we’re nothing without our team.”

Four rounds into the year and only 126 points behind McLaughlin, Coulthard talked about how important it was to get up above his team-mate this weekend and what it could mean for the rest of the year.

“He’s (McLaughlin) a specialist around this place, in qualifying he’s unbelievable; you’ve got to really up your game to beat him.
“(When) you have two fast guys, you always push each other and having two cars that are fast, you can share information and have setups which are relatively similar.

“We’re still in with a shot (of the title), there’s a long way to go. In these last two weekends, we’ve been on the podium in every race and getting points which definitely helps our championship charge.

Teams have a few weeks to get home and debrief ahead of the next race, the Perth SuperNight around Barbagallo Raceway. The SuperNight race moves to the Western Australian venue after being hugely popular at Sydney Motorsport Park last year.