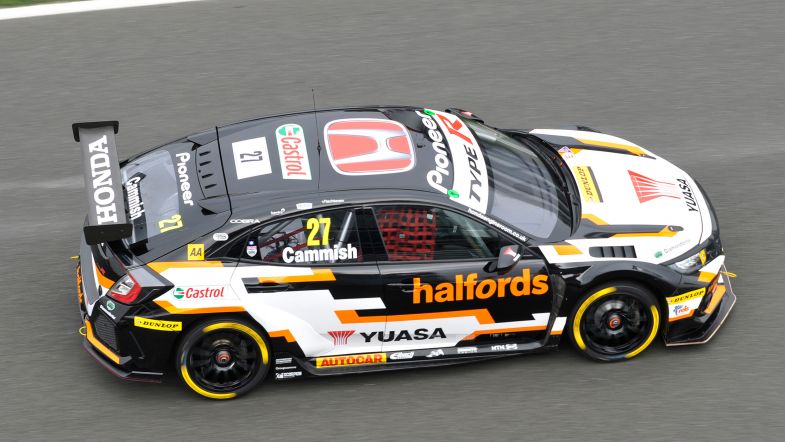 Dan Cammish topped the times for Honda as the majority of the BTCC field headed for Thruxton for the series’ annual official test.

Only Team HARD’s Carl Boardley was missing of the 30 drivers entered into the series this season, with the remaining 29 using the near two hours of running to gain valuable track time ahead of two rounds at the high-speed Hampshire circuit this season.

Cammish posted the best time at the wheel of his Honda Civic Type-R during the morning session, with a storming lap that was nearly seven tenths of a second quicker than anyone else could manage at that point.

“It’s always nice to be quickest,” Cammish said. “We went very well here last year and did a good job. Out of the box this morning, the car felt very strong.

“We’re working through our programme and there were a few laps in there that would have been good enough for pole.

“As a driver, I’ve come long way since this time last year and so has the car. We’ve made improvements over the winter and we’ll see a bit more from it here. As a package we should be strong. Right now I’d have to say I’m glad we’re coming here twice.”

Cammish headed Colin Turkington and Tom Ingram in the morning session but it was Chris Smiley who led the way in the afternoon, where all the drivers bar Cammish, Tom Oliphant, Jason Plato and Jake Hill were able to improve their times.

BTC Racing driver Smiley had been down in 19th spot during the morning but vaulted up into second on the overall times with a best lap two-tenths of a second down on Cammish’s morning best, with the older FK2 Honda of AmD’s Rory Butcher slotting into third place.

“This morning was the first time I’d driven at this circuit in this car before and around real high speed corners,” Smiley said. “The first session was about trying not to cause any damage – driving the car to where I thought was safe. Despite losing the tyres towards the end, I was matching the times we were doing early on so that’s a good sign.

“This is a track that you have to treat with respect and in the second session we’d looked back through the data and got a feel of things and had a better idea of what we had to do.”

Ash Sutton, quick during both sessions at the wheel of Team BMR’s Subaru Levorg, would end the day fourth fastest, with Aiden Moffat’s Mercedes and Turkington’s BMW rounding out the top six.

Elsewhere, Matt Neal would end up down in 22nd place having been able to complete just ten laps during the afternoon to add to three in the morning, putting him just behind top rookie Dan Rowbottom.

It was also a troubled day for Team HARD’s Michael Crees who completed just 17 laps and ended up more than five seconds off the pace as he sampled the circuit for the first time.