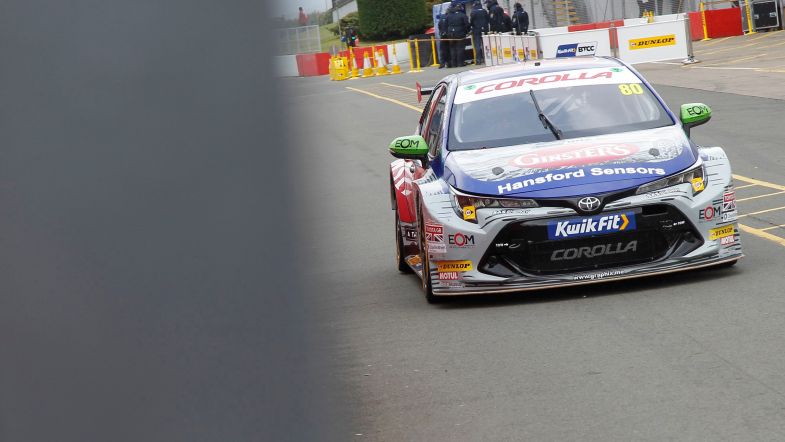 Speedworks Motorsport’s Tom Ingram took a maiden win for his new Toyota Corolla in the reverse grid finale at Donington Park, the third race of the day with a lights-to-flag victory from pole position.

Ingram made the most of his starting position to head Trade Price Cars Racing’s Jake Hill and the fast-starting Rob Collard off the line, to take a lead he would never lose – all in front of more than 4,000 guests from Toyota.

While Hill eventually fell back on the hard tyre in his Audi S3, Collard ran Ingram close and finished just over a second behind in his Power Maxed Racing Vauxhall Astra, securing his first podium for the team.

BTC Racing’s Josh Cook rounded out the podium in his Honda Civic FK8 after a strong fightback from his race one woes, with AmD Tuning’s Rory Butcher continuing his strong day in fourth in the older FK2 Civic.

Team BMR’s Ash Sutton took the lead in the standings with a fighting fifth ahead of Hill, with Collard’s team-mate Jason Plato seventh and Ciceley Motorsport’s Adam Morgan a highly-credible eighth, recovering well from his first race lap one crash.

While the battle up front was a relatively sedate affair, the safety car made an appearance for the sixth time in the three races.  It was deployed on lap one after a disastrous few corners for Team Hard, as both Michael Crees and Carl Boardley went off luridly at the bottom of the Craner Curves in their Volkswagen CCs, the latter hitting the barriers hard.

To compound their misery, Jack Goff slid into the Old Hairpin backwards, hitting the front of Nicolas Hamilton’s Ford Focus ST before dragging his damaged car back to the pits to retire.

After six laps under caution, Collard was quickly past Hill into second, with both Cook and Butcher demoting the Audi yet further on lap 11.

While Sutton and Morgan continued to fight forward, the positions at the front remained unchanged, with a hugely popular and emotional victory for Ingram and Speedworks.