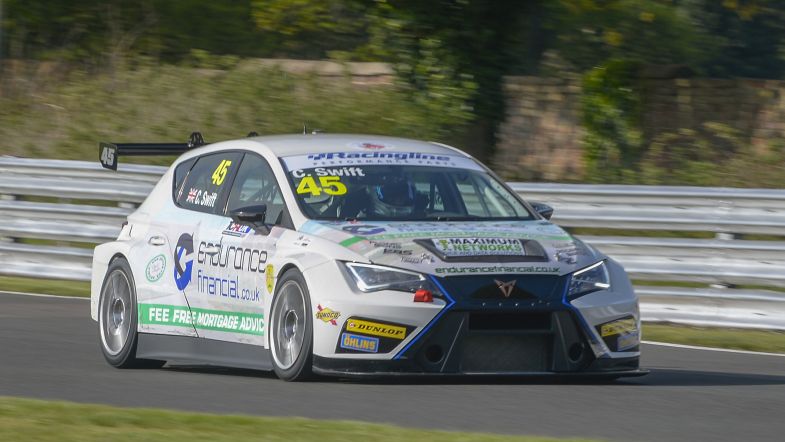 Carl Swift is understood to have won the first race of the Touring Car Trophy and TCR UK championship season at Oulton Park, after leaders Ollie Taylor and Henry Neal crashed out with one lap remaining.

Neal quickly got back ahead of Day’s Audi, and then spent the next few laps battling with Swift’s Cupra to fight his way back to second.

The son of the three-time champion made his move as Old Hall on lap five, but was unable to complete the pass, but was able to get ahead on the same lap at Knickerbrook and began to chase down Ollie Taylor’s Cupra.

Neal made a move down the inside at Old Hall on lap 11, but Taylor was able to get back ahead at Cascades.

Two laps later and Neal made another move, first moving to the outside before diving down the inside at Old Hall, but the two cars locked wheels and both went off into the barriers.

The race was red-flagged due to the two cars being buried in the tyre barriers and requiring recovery.

Swift is set to be declared the winner of the race, with cars not running under their own power when the red flag is shown set to not be classified according to the Touring Car Trophy regulations.

That will see Alex Day classed in second in the HMS Racing Audi A4, with Sunny Wong finishing third in the Teamwork Huff Motorsport Volkswagen Golf GTI TCR.

The top six classified finishers are set to be reversed for Race 2, which starts at 16:45 BST. This means Guy Colclough will start from pole ahead of Turkington and Wong.