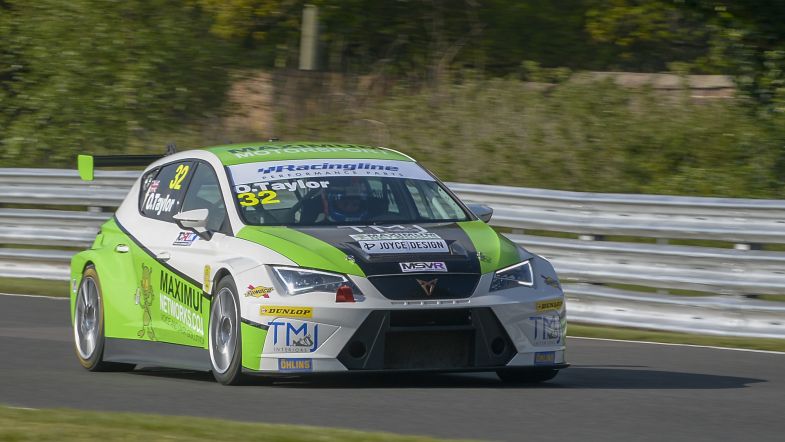 Ollie Taylor bounces back to win Race 2 at Oulton Park

Ollie Taylor has won the second race of the day at Oulton Park, going from sixth to the lead in his repaired Maximum Motorsport Cupra TCR in just four laps, finishing ahead of Henry Neal’s Honda and Carl Swift’s Cupra.

The reversed grid was cancelled at the last-minute, with the grid set as per the result of Race 1, with Carl Swift starting from pole position in his Cupra TCR ahead of HMS Racing’s Alex Day and Teamwork Huff Motorsport’s Sunny Wong.

Day got the jump on Swift at the start in the HMS Racing Audi A4, while Taylor leaped from sixth to third by the end of the first lap.

By the end of lap two, Henry Neal was up to fourth in the Team Dynamics Honda Civic FK2, passing James Turkington’s Ciceley Motorsport SEAT León Supercopa, and then set about closing in on the breakaway top three.

Taylor also passed Swift on lap two, and two laps later, Taylor swept into the lead ahead of Day’s Audi and began to break away.

Further behind, James Turkington was rapidly falling behind the pack and was being hounded by Sunny Wong’s Volkswagen.

Wong lost ground on lap six in the battle and fell behind the DAT Racing Cupra TCR of Guy Colclough, but quickly re-passed him at Old Hall on lap seven and set about catching Turkington’s SEAT again.

On lap ten, a mistake for Swift allowed Neal through to third in the BTCC-specification Honda Civic FK2, and then Day stopped on lap 13, promoting Neal to second.

Taylor went on to win the race by 1.5 seconds ahead of Neal, with Swift third.

Turkington finished fourth, holding off Wong’s car to the finish, with Colclough the last classified finisher.

Carl Swift leads the standings on 82 points, with Turkington and Wong tied for second on 72 points.

The next round of the championship takes place at Donington Park on June 22nd-23rd, not counting the non-championship round with the TCR Europe series at Spa on June 5th-6th.