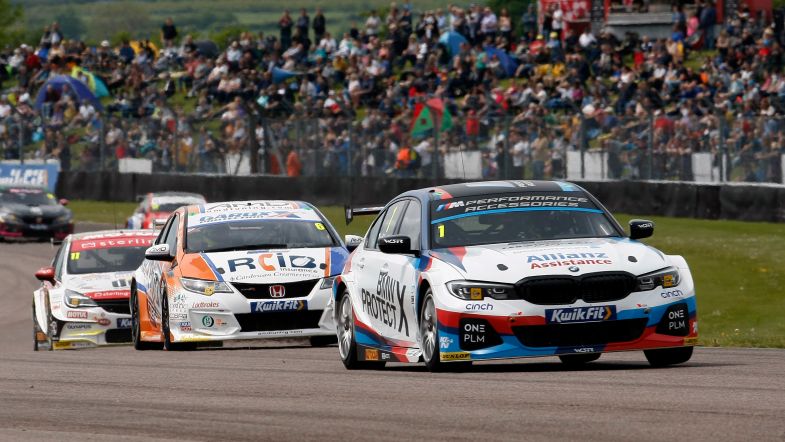 Colin Turkington and Rory Butcher will head to Croft for the fourth round of the BTCC season in a share of the championship lead after edging ahead in the race for the title at Thruxton.

Defending champion Turkington had gone into the weekend sitting third in the standings, five points behind the Subaru of Ash Sutton.

Having qualified on the second row of the grid, Turkington secured a fourth place finish in the opening race before following team-mate Andrew Jordan home to second in race two – a result that meant he then started race three down in tenth after the reverse grid draw.

Running in the pack, Turkington secured ninth in the final race of the weekend to ensure he heads the standings going to Croft by virtue of his superior win record.

“It’s been a positive weekend,” he said. “Thruxton is a circuit where it can easily go for or against you, and we had to work hard. Qualifying was key and to be P4 on the grid with weight onboard has really set us up for race day. I’m pleased that we were able to score well across the three races as it has been tough and we’ve really had to push hard for it.

“This is one of those weekends that shows how important it is to be there at the finish, particularly in race three when things got a bit frisky at the Complex after the first safety car. We had to make sure we got some good points and whilst I wouldn’t say we have done anything special, we’ve been consistent.”

Butcher meanwhile went into the weekend just six points off the lead, and took fifth and seventh from the opening two races.

Having discovered a damper issue on his Honda Civic, changes ahead of race three allowed the Scot to challenge at the sharp end and a strong start saw him quickly jump up into second spot; a position he would hold for a second podium of the season.

“It’s been a fantastic weekend after a tough Saturday where we lost a lap that would have given us pole,” he said. “We didn’t quite have the pace to run at the front in race one or two but then found an issue with a damper ahead of race three. With that sorted, the car really came alive and it gave me the confidence I needed in the high-speed stuff.

“I was able to get ahead of Ash [Sutton] with a solid move out of Goodwood and hoped to push Josh [Cook] but he kept it nice and tidy and didn’t put a foot wrong. When Ash got a second wind, I focused on bringing the car home and we have ended up with some cracking points and a share of the points lead.

“It isn’t where I expected to be at this stage although I did think we could compete. I’ve kept the same mentality I had in the MG of racing hard, keeping it clean and bringing it home. When I have a fast car like we did in race three, we’ve got to push for those big points and some silverware.”