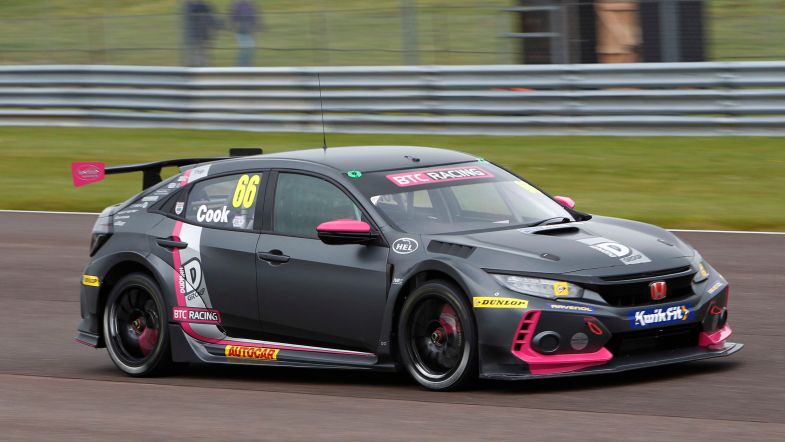 Josh Cook secured his second win of the 2019 BTCC season after leading the way in the final race of the weekend at Thruxton.

Cook had started the race from second on the grid behind Ash Sutton but got ahead of Ash Sutton into the Complex for the first time, just before the Safety Car was deployed after Adam Morgan collected a spinning a Rob Collard and was forced to retire.

After the restart, Cook looked to break away from the front with Sutton coming under pressure from Rory Butcher, who swept ahead at Church into second place – with the top three breaking away from the pack behind after Butcher’s team-mate Sam Tordoff was forced to retire from fourth.

Even when the safety car was deployed a second time after a clash between Carl Boardley and Rob Smith, Cook was able to maintain his position at the head of the pack in slippery conditions to secure his second race victory of the season.

Butcher came under increasing pressure from Sutton’s Subaru through the closing laps but a small error at Church on the final lap gave the Scot some breathing space as he secured second place and with it, a share of the championship lead for Cobra Sport AmD heading to Croft.

Behind the top three, Matt Neal took fourth for Team Dynamics having seen off the challenge of Tom Ingram’s Toyota, with Dan Cammish rounding out the top six in his Honda Civic Type R.

Seventh went to Tom Oliphant, who was able to pick his way through the drama on race one to rocket up the order and then showed strong pace to make up further places in his BMW, finishing just ahead of Jason Plato and Colin Turkington – who shares the points lead with Butcher as a result.

Aiden Moffat’s Mercedes rounded out the top ten, whilst one of the performances of the race came from Collard who pitted under the Safety Car to have the bumper removed from the rear of his Astra after the contact with Morgan and managed to battle his way back to 14th place.

There was disappointment for double winner Andrew Jordan however, with contact from Stephen Jelley tipping him into a mid-race spin that resulted in a 17th place finish.