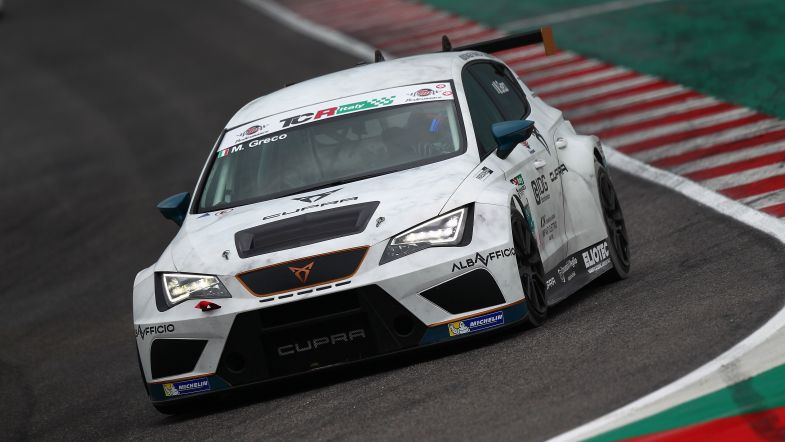 Matteo Greco fights his way to victory in Misano Race 2

Cupra driver Matteo Greco fought his way up through the field to win the second TCR Italy series race at Mugello, passing Alfa Romeo driver Massimiliano Mugelli for the lead on the penultimate lap.

The race started on a semi-wet track with several incidents on the first lap, as well as the warm up lap.

Jacopo Guidetti spun off track on the warm up lap in his Audi RS 3 LMS but was able to rejoin the race despite making light contact with the barriers. But things went even worse for the Italian later as he was black flagged for two incidents with competitors during the race.

Salvatore Tavano made the best start from third on the grid as the lights went to green, claiming the lead into turn one while pole-sitter Felix Wimmer dropped two positions.

Not long after that and Igor Stefanovski went off into the barriers, retiring on the spot and forcing the safety car on track.

The safety car went back into the pits with 17 minutes left of the race.

As the race resumed, Alfa Romeo driver Mugelli was a man on the move, making his way into the lead.

Mugelli was unable to resist an attack from Cupra driver Eric Scalvini who was able to get past on the very last lap to finish second.

Mugelli had to settle for third position ahead of Austrian driver Wimmer in fourth and Hyundai driver Pellegrini making his way back up through the field to finish fifth, despite pitting at the beginning of the race.

The TCR Italy series continues at Imola on June 22-23rd.