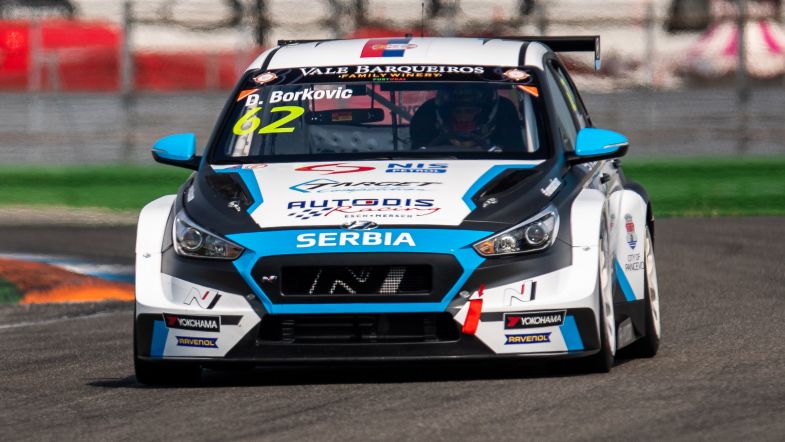 Dusan Borkovic has hit out at the officials for handing him a drive-through penalty in response to his contact with Stian Paulsen at the start of Race 2 at Hockenheim, which scuppered his chances at scoring points on Sunday.

Borkovic had a dramatic first race on Saturday, with a battle-scarred car finishing in 14th place, after the race was counted back by one lap due to the chequered flag being waved too early. If it wasn’t for this error, he’d have been classed as a DNF in both races.

Borkovic’s car was damaged in Race 1 after run-ins with Paulsen’s Cupra TCR, the BRC Hyundai of Luca Filippi, and then finally with the Vukovic Motorsport Renault Mégane RS TCR of John Filippi in Saturday’s race.

In Race 2, Borkovic hit the rear of Paulsen’s Cupra shortly after the Norwegian rejoined the track, and was swiftly handed a penalty which put him to the back of the field.

“I want to forget this weekend ASAP,” said Borkovic.

“I can’t believe that I received a drive-through penalty on top of everything that happened this weekend. I don’t mind any decision by the stewards that applies to all drivers, but this is a checkmate thing where nobody even bothered to see from onboards that actually Paulsen hit me three times and damaged my car.

“I lost five positions because Paulson hit me at the beginning, the second time he hit me he pushed me to hit (Tom) Coronel, and the third time he just cut in front of me from the gravel and I just ran into him as I was blindsided.

“I don’t think it should be my fault that some drivers don’t know how to stay on the track or to use common sense.”