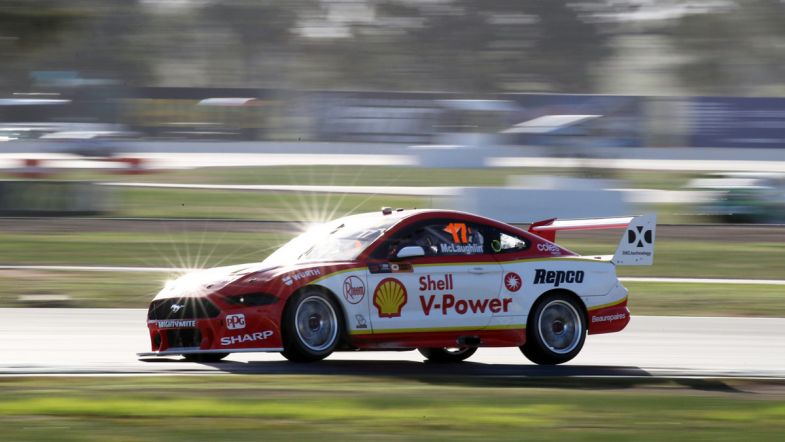 Yesterday’s race winner took his fifth pole in six starts at the Victorian venue, over half a second clear of his DJR Team Penske team-mate Fabian Coulthard in another front row lockout for the team.

McLaughlin’s form was carried over from the morning practice session where he kept improving further on his one-lap pace across the weekend, topping every session of the day to take pole.

Practice
With the sun making a rare appearance for the weekend, the morning practice/pre-qualifying session was the fastest of the round so far as the field made use of the cool but dry temperatures to post quick times.

Saturday winner Scott McLaughlin went to the top of the timesheets early on in the session, the DJR Team Penske driver posting a 1:18.934 on used tyres which was still over half a second clear to the rest of the pack, headed up by Erebus Motorsport’s Anton de Pasquale.

The final runs of the session saw most of the field range in on McLaughlin’s time but no one could eclipse it, yesterday’s pole-sitter Chaz Mostert coming closest in his Tickford Racing Mustang.

Making the top ten to automatically qualify for the second qualifying session, Fabian Coulthard, Jamie Whincup, David Reynolds, Will Davison, Scott Pye, Cam Waters, Anton de Pasquale and Nick Percat progressed through while big names like Shane van Gisbergen and Mark Winterbottom would have to fight it out in qualifying one.

Qualifying 1
The first knock-out session of qualifying took place between the bottom 15 drivers from the earlier practice session, looking to be one of the fifth fastest to advance through the sessions.

From the outset of the session it looked like van Gisbergen in the Triple Eight Holden was struggling with car balance, undoubtedly not helped by an eye infection which he’d been nursing the whole week.

Andre Heimgartner in the Kelly Racing Nissan sat atop the standings near the death, electing to park up the #7 car before going out for a final run as the rest of the field hit the track, trying to jump up into the top five.

Kelly Racing had reason to be happy when team owner Rick Kelly jumped to the top after the chequered flag, ending the session on top as Lee Holdworth in the Tickford Mustang slotted into second. van Gisbergen ended up in third after some mid-session changes while Heimgartner and James Courtney for Walkinshaw Andretti United made it through.

Qualifying 2
In the next 10 minute session, 15 drivers looked to be amongst the 10 fastest to make it through to the final qualifying blast and it was McLaughlin who unsurprisingly jumped to the top in the first flying laps.

It was an all-Ford top four early on with McLaughlin, Holdsworth, Davison and Coulthard all getting amongst it but the final laps of the session well and truly mixed up the order.

McLaughlin bettered his own time with a 1:18.825, remaining at the top of the order until the flag despite a late lap from Coulthard was on track to go faster. Reynolds and de Pasquale followed the DJR Team Penske cars to make it a two-by-two formation at the top.

Holdsworth, Whincup, Heimgartner, Mostert, Davison and Waters all advanced through to the final 10 minutes but Percat, Kelly, van Gisbergen and the WAU duo of Pye and Courtney could take no further part in qualifying, giving themselves a lot of work to do in the 200km race.

Qualifying 3
The final 10 runners all hit the track to set their grid spots for the afternoon’s 200km race and it was again McLaughlin who was fastest out of the blocks, some four tenths clear over Whincup on their first flying laps despite de Pasquale having the fastest opening sector.

Another burst of fast laps came through at the end of the session, headed up by McLaughlin who reset the track record with a 1:18.523, over half a second clear of team-mate Coulthard in second.

No one could find an answer for the DJR Team Penske pair who locked out the front row, out-qualifying Whincup, Reynolds, Mostert, de Pasquale, Davison, Holdsworth, Waters and Heimgartner in the final session.

With the grid set for this afternoon’s race around Winton Motor Raceway, the teams have two hours to reset themselves ahead of the 200km showdown.