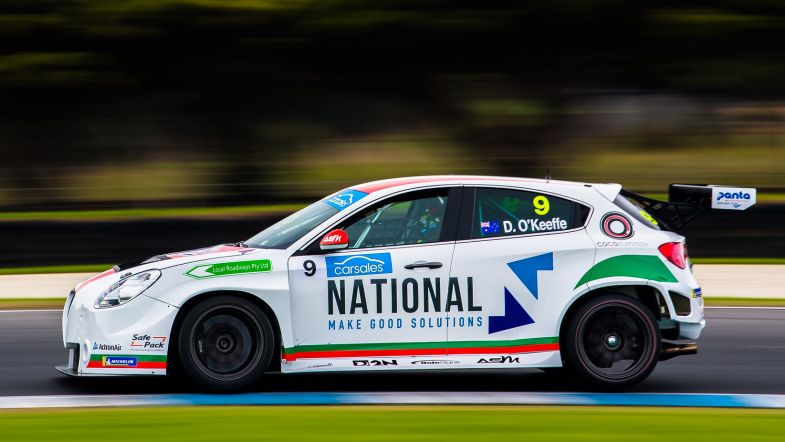 Dylan O’Keeffe has topped practice for the second round of the TCR Australia Series at the Phillip Island Grand Prix circuit.

The round one runner-up trailed early pace setter Garth Tander in the first of two, 30-minute sessions but jumped to the top of the charts after the chequered flag in the second session with a 1m36.6334s flyer in his Ash Seward Motorsport-prepared Alfa Romeo.

The young Victorian driver was a star performer at Sydney Motorsport Park three weeks ago, challenging for the lead across the weekend before ultimately finishing second to winner, Will Brown.

Chris Pither showed the promise in the Garry Rogers Motorsport Renaults by finishing the day in sixth position, with round one polesitter Tony D’Alberto seventh in the second Civic. Round 1 winner Will Brown, VW driver Aaron Cameron and the second HMO Customer Racing Hyundai of Nathan Morcom tenth.

Tander topped the first session in the morning and was quickest in practice two for all of the session before O’Keeffe’s final flyer right at the end.

The multiple Bathurst winner and former Supercars champion took no time adapting to his first foray into front-wheel-drive racing, topping practice one in the morning before improving on his best effort in the second of two 30-minute sessions.

Tander had no chance to improve on his best in the second session after his car lost drive on the circuit and stopped, bringing out the red flag and curtailing his session with eight minutes to go.

“I thought I’d gone too deep into Honda on the brakes. I drove around on the grass and when I came back onto the track it had no drive,” Tander said.

“I thought it was better to get towed back, rather than drive it and cause more damage. It’s a pity, because it was a good lap. I was half-a-second up.”

Earlier in the day, Tander topped the first 30-minute session after he quickly adapted to the front-wheel-drive Audi at Phillip Island.

His 1m37.2220s best came mid-way through his 12-lap session and despite a what was described as a ‘significant’ spin at turn one.
O’Keeffe was second and John Martin third with the Friday hierarchy established early in the weekend. In another new Audi, Leanne Tander was fourth on her debut, just 0.9 seconds behind husband Garth on top of the charts.

The session was mostly trouble free, save for Alexandra Whitley finding the gravel at turn six on her out lap from pit lane.
Championship leader Will Brown had a challenging day, only eighth fastest in practice two on Friday afternoon.

The Toowoomba driver, who recently turned 21, reported turbo boost issues in the first session and then a car that was challenging to drive in practice two.

Saturday’s action will bring qualifying and race one, with a further two races set for Sunday.

All of the racing will be streamed live via the TCR Australia website.