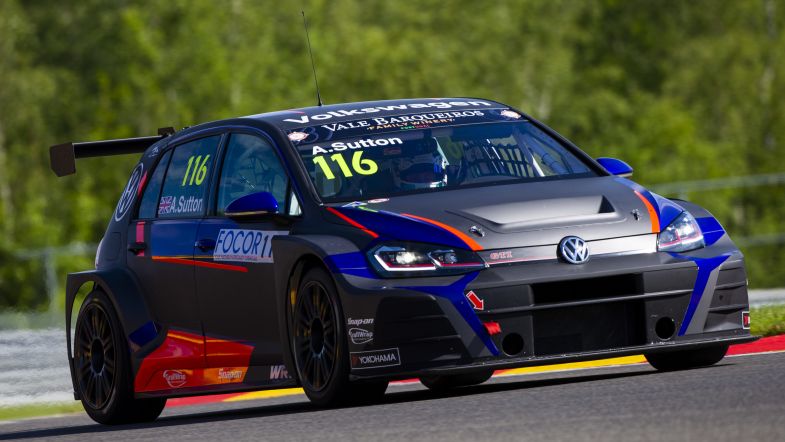 TCR Europe series returnee Ash Sutton believes he has more to give over the course of the Spa-Francorchamps weekend after labelling Friday’s practice “a write-off.”

The 2017 British Touring Car champion is making his first TCR Europe series appearance since the 2018 finale in Barcelona last October, but will run 20kg heavier than the rest of the Volkswagen Golfs due to his late entry.

Sutton is also driving with the new common ECU – first introduced by Sebastien Loeb Racing in the World Touring Car Cup – aboard his Team WRT Volkswagen Golf GTI TCR, but was left frustrated by a power steering issue in FP1 and a red flag in the second session.

“We had a slight issue with the power steering so I wasn’t able to put a lap together or push really. So it was just a case of getting my eye in and finding my feet [on the circuit],” Sutton told TouringCarTimes.

“Then unfortunately the red flag came out, so we’ve probably only done two realistic flying laps. Obviously that was FP2, but FP1 was pretty much a write-off for us.

“We’ve got two boys either side of us [WRT team-mates Maxime Potty and Santiago Urrutia] and we are feeding off their data. It’s just one of those things that will speed up the process, but carrying the weight we are carrying, it’s always going to be something of a losing battle.”

Despite starting the weekend on the back foot, Sutton – who had never previously driven at Spa – remains confident that a strong result is possible.

He added: “But I’m feeling okay about tomorrow. For us, it’s a case of gaining track experience and losing some of that weight. If we’re looking at doing more races this season, then it’s good to get that weight off this weekend.

“The car is capable of getting a podium, the Golf is very good. Barcelona was the proof of that, but when you’ve got 60kg sat next to you, it’s a little bit different.”

“Every time I strap myself into the car it’s a learning curve for me. We’re looking at different avenues to go down with regards to setup and WRT have done a great job so far, so it’s good.”