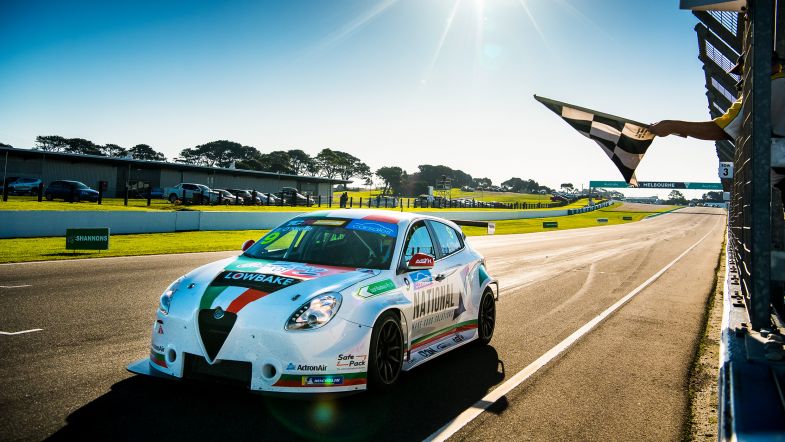 Dylan O’Keeffe has added his name to the winners list in the TCR Australia series, winning a wild opening race at the Phillip Island Grand Prix circuit in Victoria.

The Garry Rogers Motorsport Alfa Romeo driver survived two restarts and a host of dramas behind to take his first win by nearly five seconds, leading Will Brown and James Moffat home to record a maiden victory in the series’ most dramatic race yet.

“It feels great to get this victory. The car has been excellent all weekend,” said Dylan O’Keeffe.

“It’s a credit to the team for getting me here. The Alfa has a lot of pace as we showed in qualifying putting the one lap together, and it’s also quick over a race distance too.
“I’m really looking forward to tomorrow and try to close that championship points gap to Will (Brown).”

The 13-lap race – it ran three laps short than the scheduled duration due to a pair of safety car interruptions – was wild from the outset with the pair of HMO Customer Racing Hyundais in trouble at turn two on the opening lap.

The damage saw the safety car called, negating O’Keeffe’s stunning start and opening lap that saw him build a healthy margin before the race was neutralised.

The restart was equally exciting as Tander and Bright came together at turn one, while Jimmy Vernon found himself in the top three – having climbed from 12th to third in the opening lap dramas.

The Ash Seward Motorsport Alfa again pulled away from the field on the restart as the fight for second teed off behind.

Bright was in the wars again two laps later as he and Subaru racer Andre Heimgartner battled at turn two, the Volkswagen turning the Subaru into a long slide as they exited the Southern Loop.
As the pair tried to become unstuck, Vernon’s Alfa was caught up in the drama and was also turned around. That drama saw the safety car recalled for the second time with a frustrated leader once again seeing his margin reduced.

Brown, who had dropped to as low as 16th position, was the big mover and restarted fifth in his Hyundai in what was becoming a championship points-salvaging effort.

The race restarted on lap nine with the Alfa Romeo again pulling away from the field.

James Moffat and Tony D’Alberto traded paint in their battle for second place, the Renault coming out on top as D’Alberto found himself shuffled back to fourth position. Splitting the pair was the persistent Brown, who’s mighty comeback saw him climb from near-last to podium contention.

The Hyundai then attacked Moffat for second and wrestled the spot away on the final lap with a wild, side-by-side battle through the 200km/h Hayshed corner, Moffat ultimately settling for third and a maiden podium for the GRM Renault.

O’Keeffe eventually won by four seconds with Brown and Moffat completing the podium.

“There was lots going on in that one – I tried the hero move around the outside and lost the rear of the car and went to the back of the field,” Brown enthused post-race.

“The Safety cars got me back up there to second. I think we could have run with Dylan and put on a good show, but I think we put a good show on anyway coming from the back.

“We can challenge Dylan tomorrow. Our car was quick then, we set the fastest lap, I just need to make sure I don’t do anything silly like I did today.”

Moffat, who endured a challenging opening round in Sydney last time out, said he was pleased to score a maiden podium for the still-new Mégane.

“It’s great to get the Renault Mégane its first podium in Australia,” he said. “Every time we take the car out we are learning more and more about it. The car is still at its early stage of development.

“To get a result like this, even though we got a bit lucky with the amount of carnage that was going on, it is very pleasing.”

D’Alberto banked good points in fourth, Garth Tander’s TCR debut netting him fifth in a combative race that saw him yo-yo up and down the leaderboard.

His teammate Hamish Ribarits finished just behind in sixth with Alex Rullo a quiet achiever in seventh.

Chris Pither (Renault) held out Leanne Tander’s Audi for eighth and ninth while a recovering Andre Heimgartner bounced back to score points in 10th – having earlier pitted to check for damage after his altercation with Bright earlier in the race.

13 of the 18 starters finished with Chelsea Angelo, Molly Taylor, Bright, Vernon and Morcom all failing to finish the race.

Two races complete the second round of the championship at Phillip Island on Sunday, the Race 2 grid to be decided on finishing positions from Saturday’s opener.