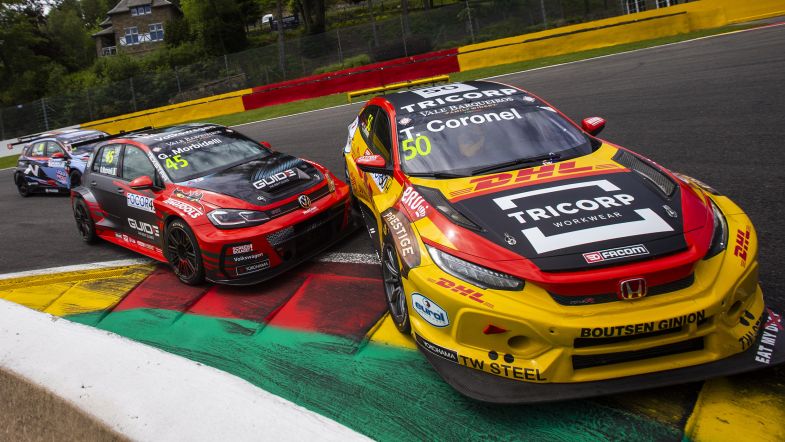 Tom Coronel has mocked the driving standards of the TCR Europe series field after an incident-packed race, where the Dutchman ended his contact heavy race in the barriers at Eau Rouge following contact from BRC Racing’s Luca Filippi.

In a race, where presently seven incidents are under investigation, Coronel was one of nine cars to fail to finish, with the cars of Natan Bihel, Daniel Nagy and Coronel all ending the race with significant front-end damage in separate incidents.

“I had good fun, and I had some good battles,” said Coronel to TouringCarTimes.

“Gianni Morbidelli was a bit frustrated, he hit me 4-5 times, even down the straight, which isn’t really on.

“Then at Les Combes, (Santiago) Urrutia hit me up the back really hard, then I think I got stuck to (Stian) Paulsen as I couldn’t release him. It was really weird. I locked completely and my splitter was stuck in his car.

“After that, I kept on pushing but my water temperature went high, and then I got hit by Luca Filippi at Eau Rouge and then I was completely in the wall.

“They don’t think or look ahead, they’re racing too hot – they’re not clever.”