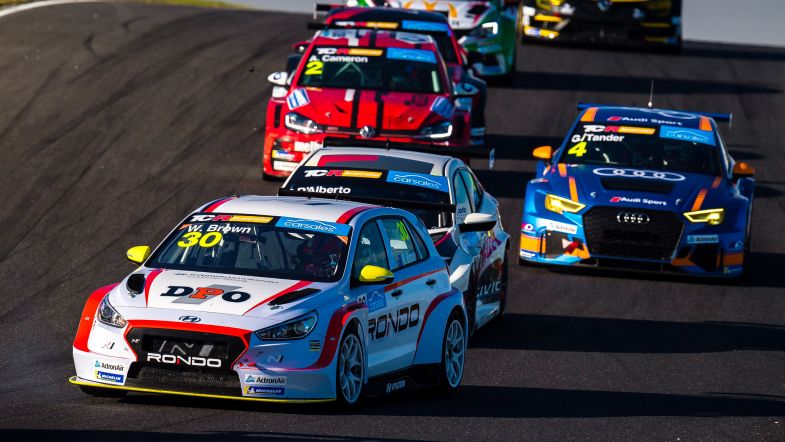 Will Brown’s championship hopes have been given a massive boost as misfortune struck an otherwise dominant Dylan O’Keeffe at Phillip Island, in Round 2 of the TCR Australia series.

Having won race one on Saturday, O’Keeffe powered to victory in race two a day later at the high-speed Victorian circuit – however scored zero points in the finale’ after a heavy crash on the opening lap left his car written off and out of the race.

Brown, who had ceded the championship lead after finishing second in race two, reclaimed the top spot in the standings by virtue of his third win of the season just an hour later in the day.

O’Keeffe won race two ahead of Brown and rookie Hamish Ribarits, while Brown headed a HMO Customer Racing 1-2 in the second race with Nathan Morcom and Aaron Cameron completing the podium.

A combative weekend saw several cars suffer damage across the pair of back-to-back Phillip Island races, with some teams set to face a challenging turn-around ahead of the series’ next round at The Bend Motorsport Park in South Australia, in early July.

The scheduled 16-lap sprint burst into action from the outset. While pole sitter Dylan O’Keeffe and Saturday runner-up Will Brown sprinted away in front, James Moffat ran his Renault wide on the exit of Turn 1, spearing across the circuit at high speed in an incident he later attributed to ‘running out of ability’.

In taking evasive action from the spinning Renault, Andre Heimgartner was collected from behind by Garth Tander, with both cars suffering damage – Heimgartner limping back to pit lane to retire.

While Moffat dropped to the back of the field, Tander’s day only got worse as the field approached Turn 4. 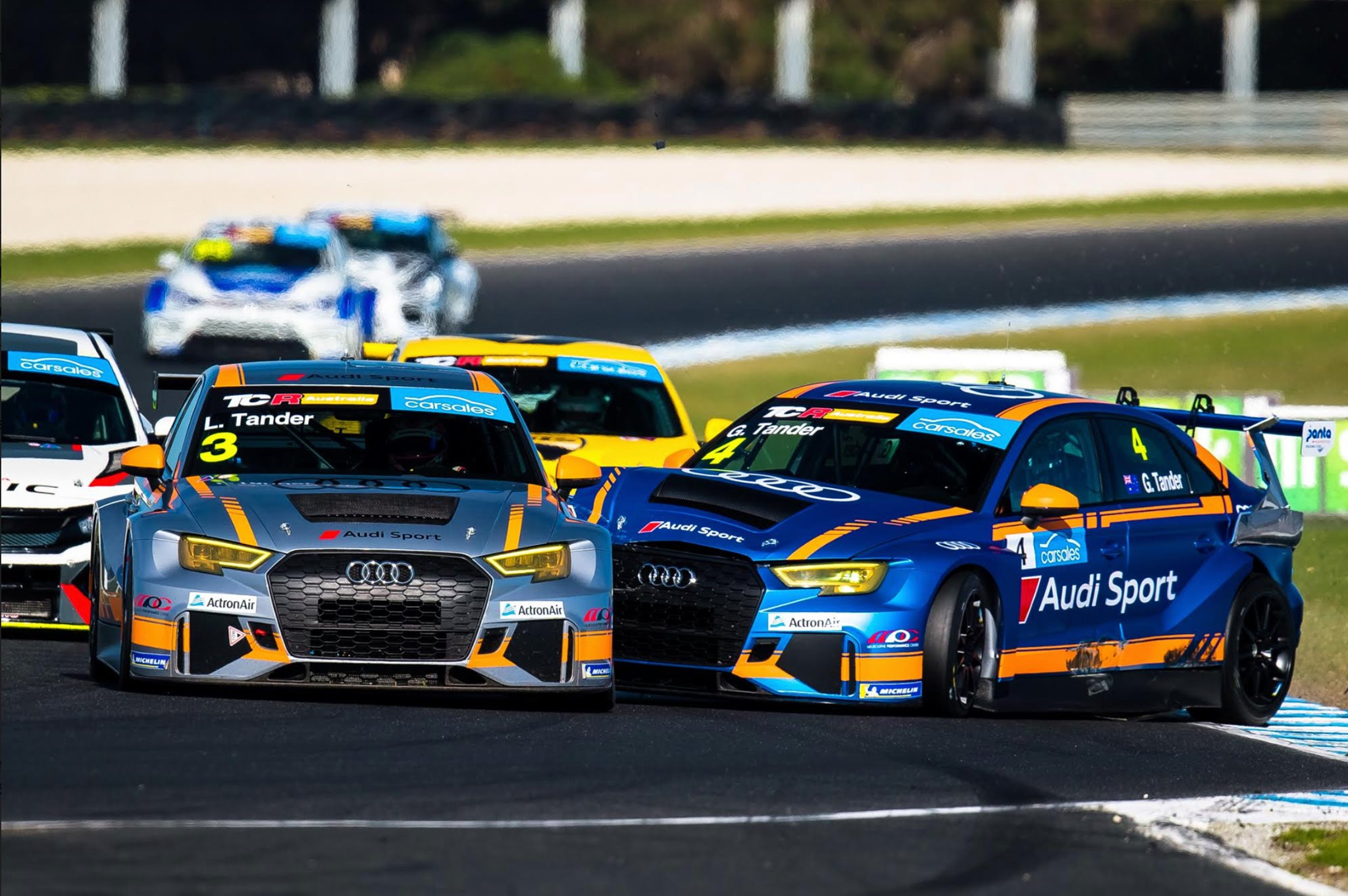 The chaos split the field, allowing pole sitter Dylan O’Keeffe and Will Brown to pull a gap over then third-placed Hamish Ribarits.

Garth Tander recovered to pit lane but was a non-finisher, while Leanne Tander dropped to the back of the field.

Brown attacked O’Keeffe for the lead as the leaders started lap two, towing his way up behind the leading Alfa Romeo and executing a bold move into the high-speed turn one with the rear brakes locked and the car sideways.

The championship leader would only lead for three corners, however, as he out-braked himself at the Turn 4 hairpin – surrendering the lead back to the Ash Seward Motorsport Alfa Romeo.

As the leaders settled down, attention turned to the fight for the minors as Tony D’Alberto battled for a spot in the top five in his Wall Racing Honda.

The Victorian driver was forced to pit from fifth place on lap eight when his Civic TCR burst a right-front tyre. The race got worse for the Honda team three laps later when team-mate John Martin forced to surrender fourth place when he suffered the same issue.

The team attributed the nearly identical failures to debris on the circuit rather than a set-up issue in the cars. 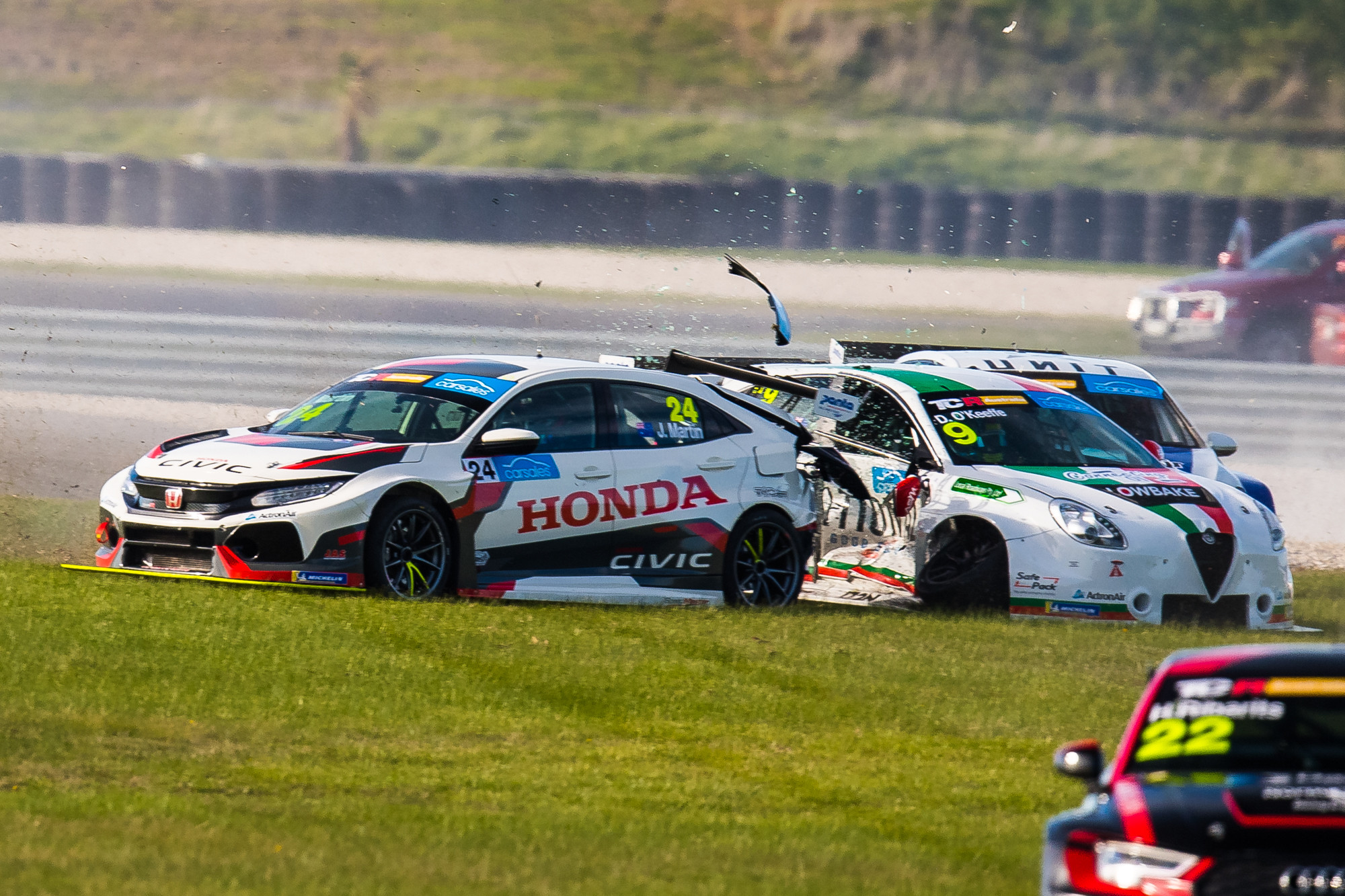 After making similarly strong starts from the front row, Brown and O’Keeffe raced side by side into Turn 1 however the Alfa Romeo spun at the middle of the corner – making contact with Brown before spinning off into the Phillip Island infield.

Behind the leaders, the pair of Honda’s ran side by side through Turn 1 before D’Alberto was hit from behind by a fast-starting Andre Heimgartner. D’Alberto then appeared to make light contact with team-mate John Martin, who was on the outside of the corner.

Martin spun off the road, the rear of his Honda slamming into the side of O’Keeffe’s Alfa Romeo Giulietta TCR that was recovering through the infield.

O’Keeffe’s car was heavily damaged and stranded – bringing out the safety car – though the driver emerged unscathed.

Martin limped back to pit lane to retirement while Alexandra Whitely was another casualty, her Volkswagen with nowhere to go as she took evasive action from the Honda’s spinning in front, making contact and damaging a radiator.

Ribarits was another in trouble as he also ran through the infield, flying across the apex of Turn 2 in front of Garth Tander taking evasive action.

The dramatic start left Will Brown and team-mate Nathan Morcom first and second at the restart, Alex Rullo a big beneficiary of the chaos as he jumped his Kelly Racing Holden Astra TCR to third.

The race restarted on lap six with Brown immediately pulling away from Morcom, who was defending from Rullo and Alex Cameron’s Volkswagen. Rullo slipped to fourth a lap later when Cameron went by; Jimmy Vernon in the same battle before he was ran wide at Turn 1 and narrowly avoided crashing into the pack as he re-joined. In a massive battle pack, he dropped to eighth by lap eight.

Brown was unchallenged in front, leading a HMO Customer Racing 1-2, while Aaron Cameron impressed on his debut in the series by finishing a stout third.

From the back of the field, Garth Tander had stormed his patched-up Audi to fourth by the ninth lap in a stout recovery drive while James Moffat was another to make up plenty of ground – finishing fifth in his Renault.

Heimgartner added his name to the list of those executing significant recovery drives by finishing sixth while Chris Pither, Jason Bright (who failed to finish Race 1 with a driveline issue), Hamish Ribarits and Leanne Tander finished tenth, having started from pit lane after her race two altercation with Garth.

Brown heads the championship standings after the Phillip Island weekend, 52 points ahead of O’Keeffe.

The next TCR Australia series round is scheduled for July 12-14th at the Bend Motorsport Park.