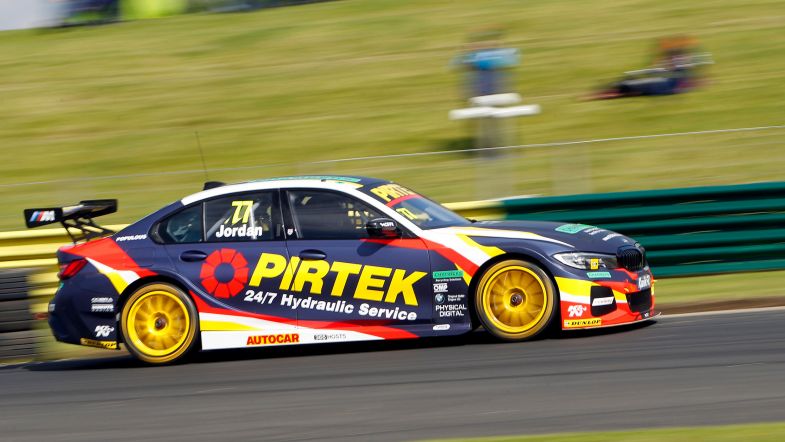 Andrew Jordan secured his first pole of the 2019 BTCC season following a chaotic session at Croft that was halted no fewer than five times – including by Jordan himself.

The planned 30 minute session would run for more than hour after a multitude of incidents and issues on track, including one for Jordan himself that would ultimately end the session six minutes early.

The first red flag would come out early to replace markers on the side of the circuit, with only limited laps available before a second stoppage caused by Nic Hamilton clouting tyres on the outside of the chicane.

Jordan had secured provisional pole on a 1:21.860 lap – below the qualifying lap record – before the third stoppage after Tom Ingram clipped a tyre stack at the Jim Clark Esses, which was then collected by Bobby Thompson’s VW.

With only half of the field having set times, a fourth attempt at getting the session going would last a matter of minutes before championship co-leader Rory Butcher lost the rear of his Honda exiting the chicane and went off heavily into the tyres; damaging his Civic and causing another 20 minute stoppage.

With rain falling as Butcher’s car was recovered, there followed a dash for pole when the action finally got back underway, with Jordan lowering his benchmark twice to extend his position at the top.

Chris Smiley’s Honda and the Ford Focus of Tom Chilton managed to get between Jordan and team-mate Colin Turkington.

As others improved their times, the red flag was thrown again after Jordan suffered a cut tyre and spun onto the grass at the complex, with the decision then taken to end the session six minutes early.

Despite losing his best time as a result of causing the stoppage, Jordan still secured pole ahead of Smiley, Chilton and Turkington, with Tom Oliphant ending up fifth in the third of the BMWs.

Ash Sutton improved just before the stoppage to take sixth spot ahead of Dan Cammish, with Ollie Jackson, Jake Hill and Jason Plato rounding out the top ten.

Amongst the big losers, aside from Butcher, were AmD team-mate Sam Tordoff and Ciceley’s Adam Morgan who will both start near the back after failing to set a representative time.

Despite the chaos and the worsening weather, 19 drivers beat the previous qualifying lap record, with Jordan’s pole being his first since 2014.