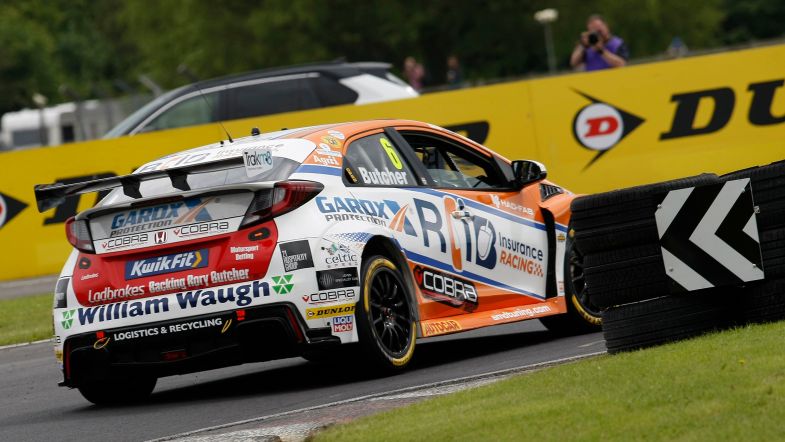 Rory Butcher: “There was no coming back from that”

Joint championship leader Rory Butcher will have work to do on race day after a heavy accident in qualifying at Croft left him at the back of the grid for the the opening race of round four.

The AmD driver had shown strong pace throughout practice in his Honda Civic Type R despite the additional ballast on his car, but was one of 15 drivers who had failed to set a time in qualifying after three red flags in the early stages.

On his first timed lap, Butcher lost the rear end of the car going through the chicane and went off heavily into the tyres on the left hand side, causing extensive damage to the Honda which spun round on impact.

A busy night now lies ahead as the team works to repair the car, with Butcher admitting that race day had now become a case of damage limitation in terms of the championship points.

“The session was so disjointed and we hadn’t got a time in in the first half with the stoppages,” he said. “We were on the tyres we started the session on and wanted to get a lap before switching to new rubber.

“I think we lost some tyre temperature and then the out lap was quite slow and it meant I didn’t get to lean on the rear right as much as I would have liked. When I did at the chicane, it wasn’t warm enough and the car went away from me.

“There was no coming back at that point and we’ve ended up with a car that is pretty hurt and with a lot of work to do. It was dramatic inside the car but luckily it wasn’t a head-on impact where we suddenly lost all the speed in one go. There is a lot of panel damage and the suspension is shot but from a first look, it could have been a lot worse.

“We’ve got to try and do what we can now to get back into the points tomorrow, which will be tricky from where we are. I started towards the back a few times in the MG and rescued something so it is possible, and we just have to get race one out of the way with the weight and the hard tyre and go from there.

“We should be ballast free in race two barring something amazing in race one, so that will be where our recovery can really begin.”

Team-mate Sam Tordoff will also start near the back having been unable to set a representative lap time during the session, which was halted a total of five times.