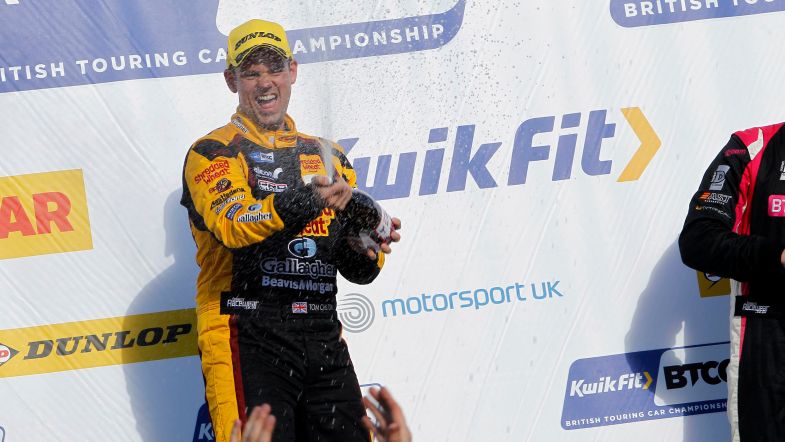 Tom Chilton: “It’s nice to keep that one!”

Tom Chilton admitted he was delighted at taking his first win of the 2019 BTCC season after emerging on top of the final race of the weekend at Croft.

The Motorbase driver had crossed the line first in race three at Brands Hatch before losing the win thanks to a post-race penalty, but headed to Croft still well placed in the standings after a consistent start to the campaign.

Qualifying third on the grid in Saturday’s chaotic session, Chilton secured his third podium of the year in the opening race of the weekend before slipping back to ninth in race two – where he was forced to carry ballast on the Focus RS.

Ninth however saw Chilton drawn on pole for the final race of the weekend and a controlled drive in tricky wet conditions resulted in him securing a victory that leaves him seventh in the standings.

“It was a perfect weekend for and the team,” he said. “We’ve managed not just a double podium, but we got the win as well. And we get to keep this one! We took three top ten’s for my car, and Ollie [Jackson] nearly got a top ten which was great starting from 20th. I’m very happy for him.

“I’m really pleased with our qualifying results this weekend. I feel like we’ve finally found our ideal set-up for the wet and dry. We had a bad weekend at Thruxton. Because we did it made us re-analyse where we were and it’s moved us forward.

“We’re in it to win it. Everyone in the team is working hard to put all of our knowledge together and make this old girl go faster this year and we’ve done a great job. I’m really looking forward to going to Oulton Park next. I’ll be looking for more of the same.”