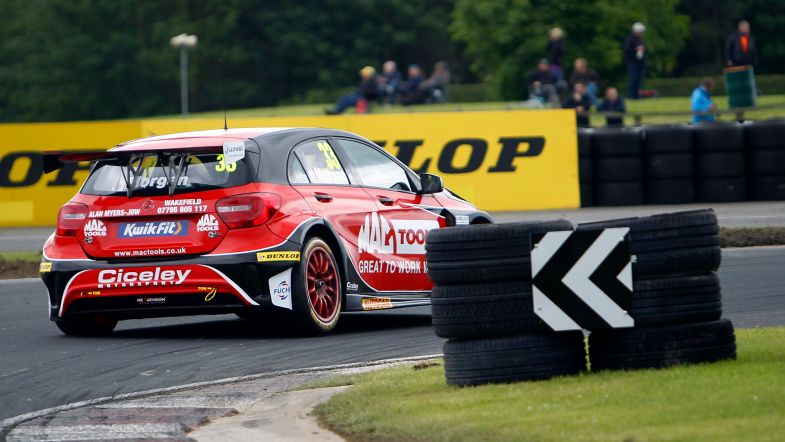 Adam Morgan was left to wonder what might have been at Croft after Saturday’s tricky qualifying session prevented him from fighting for three strong finishes from the latest rounds of the BTCC season.

The Ciceley Motorsport man was hoping for a return to form after a tricky weekend at Thruxton, where his Mercedes A Class picked up heavy damage for the second successive meeting.

Things went wrong for Morgan in qualifying however, where he failed to set a timed lap as a result of the multiple stoppages.

From 28th on the grid, Morgan battled his way forwards to 16th in race one and then fought his way into the points in races two and three – taking eleventh and ninth to add some more points to his championship tally.

However, having been able to come through the field in each of the three races, Morgan was left frustrated at the impact qualifying had had.

“Every time I was on a flying lap in qualifying the red flags flew,” he said. “We did nothing wrong, it was just other people falling off or nudging the barriers on to the track so they had to be moved. It was mega-frustrating because the car felt really good this in practice and then we were at the back.

“All things considered, to start the weekend 28th and finish ninth isn’t too bad. I had two points scores, showed good pace and avoided damage so there are positives.

“It hasn’t been as good as I wanted and part of that is down to qualifying. Because the cars are so evenly matched and it is so competitive this year, qualifying is so important and that hurt us yesterday but the Mercedes is still a force to be reckoned with.

“We’ve had good races but not a good weekend yet, so we need to string together three good finishes next time at Oulton Park. That’s the target.”