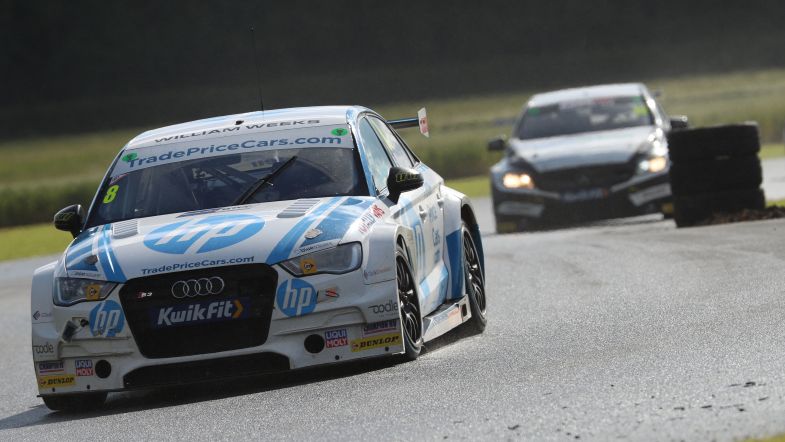 Former F1 racer Mark Blundell insisted he was “relatively happy” with his first race meeting at Croft after an improved showing in the latest rounds of the BTCC season.

Blundell headed to the North Yorkshire circuit on the bad of challenging weekends at both Donington Park and Thruxton, and was looking for a more trouble-free weekend at the wheel of his Trade Price Cars Racing Audi S3.

The 53-year-old showed solid pace during the two free practice sessions as he was one of the many drivers to dip below the previous qualifying lap record, but found himself towards the rear of the grid having failed to get a representative time in in qualifying.

Finishing just outside the top 20 in race one, Blundell found himself right at the back after a lap of race two following contact from the MG of Sam Osborne but showed strong pace as he ran alone at the rear before taking the flag in 26th.

A strong opening lap in race three saw him jump up to the fringes of the points before slipping back to 19th as the performance of his wet tyres started to drop off, although the ex-Le Mans 24 Hours winner was still happy with the progress made on track.

“Qualifying was a nightmare because we didn’t get a lap in, but overall, I’m relatively happy with the way the weekend has gone,” he said. “I feel we’ve made some good progress and I’ve closed the gap to Jake’s pace and am getting a better understanding of what I need to do technique wise in these cars.

“It’s certainly been eventful and I don’t seem to be getting much luck with the weather to help me get up to speed, but I’ve picked up three solid finishes and there are plenty of positives to take away from Croft after a few tough rounds.

“We are not there yet and we still have a way to go to get to where we want to be, but we are showing the right signs. For me, it’s all valuable experience which can only help as we head to Oulton Park.”

Team-mate Jake Hill however would endure a weekend to forget in the sister Audi after failing to make the most of qualifying inside the top ten, with twelfth on the hard tyre in race one being his only finish after he was forced off track in race two – with a trip through heavy mud causing terminal engine damage.