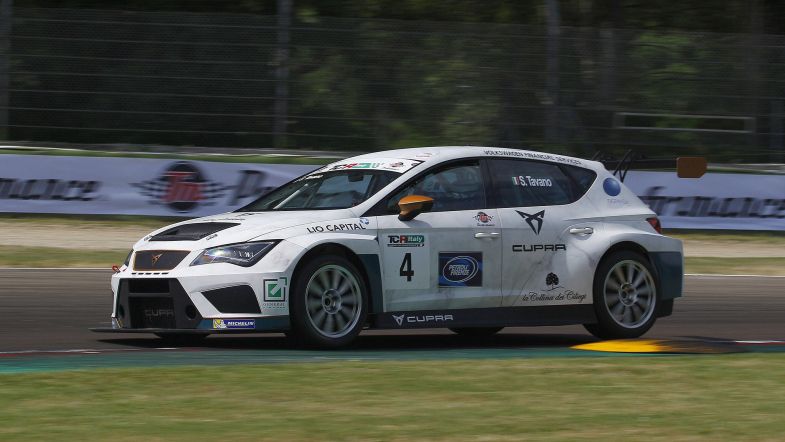 Scuderia del Girasole’s Salvatore Tavano took his first victory of the season at Imola, in a race that was red-flagged due to the heavy rain falling at the Italian track.

Felix Wimmer, with a Cupra TCR from Team Wimmer Werk MS, who had qualified in third place for the grid, was forced to start last after he’d failed post qualifying technical scrutineering.

At the start, Igor Stefanovski in his Cupra TCR, challenged pole-sitting Scuderia del Girasole Cupra of Matteo Greco for the lead, but it was Enrico Bettera, in his Audi RS 3 LMS, who would overtake both at Turn 2 to take the lead.

It then started raining on the second lap, with Stefanovski going wide at Turn 16, but still managing to stay ahead of Pellegrini.

The safety car was called into action as Peter Gross in a Team Wimmer Werk MS Cupra TCR, went off track and was stuck in the gravel trap at Tamburello.

The race was restarted on lap four, with Stefanovski attacking Bettera at Turn 10, with both drivers colliding and Bettera going off track, although still managing to stay ahead of Tavano, who was now in third place after overtaking Pellegrini and Greco. Stefanovski would receive a ten-second time penalty for the incident.

Tavano continued his progress, chasing Stefanovski as Bettera struggled with slicks on the wet track, who then lost out to Greco and Pellegrini. The safety car was called into action for the second time as the rain continued to worsen.

Bettera came into the pits with four minutes left on the clock to change histyres, in case the race would restart but, just two minutes later, the race was red-flagged, with Bettera not returning to the track.

Stefanovski was the first to cross the line but, with the time penalty, the victory went to Tavano, with Greco in second and Pellegrini completing the podium.

Matteo Bergonzini was sixth in his BF Motorsport Cupra TCR, with Davide Nardilli next with the Honda Civic Type R FK8 TCR. Damiano Reduzzi was eighth in his Trico WRT Hyundai i30 N TCR.

Felix Wimmer worked his way through the pack to finish ninth, with Stefanovski classed in tenth place.

Race 2 is scheduled for Sunday afternoon at 14:50 CEST.