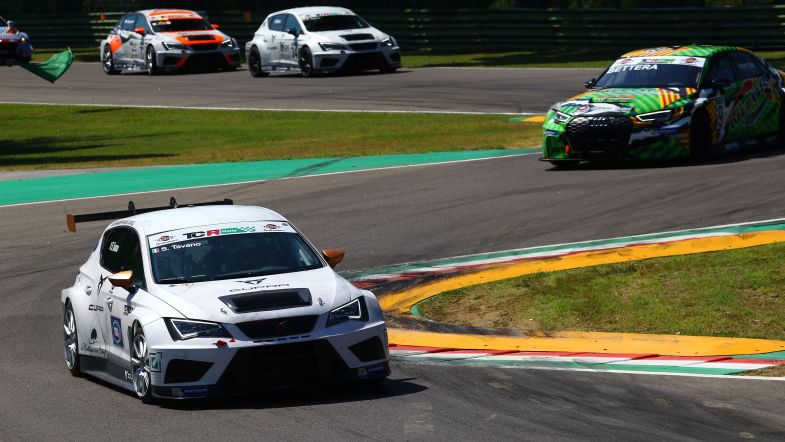 Salvatore Tavano makes it two out of two wins at Imola

Salvatore Tavano secured a perfect TCR Italy series weekend at Imola by claiming his second straight victory to head up into the points lead.

The Cupra driver started second but made his way past pole-sitter and Honda driver Davide Nardilli on the first lap.

There was plenty of contact between the drivers behind the leading duo. MM Motorsport driver Davide Nardilli fought hard with Jacopo Guidetti for third place. The two made contact and Nardilli went off track briefly.

The stewards decided to hand Guidetti a drive-through penalty for the incident, dropping him to the back of the field while Nardilli was able to finish the race in fourth position.

Next up for the stewards to handle was an incident between Felix Wimmer and Damiano Reduzzi. The two came together at the Acque Minerali, resulting in Wimmer going off the track and retiring from the race.

The incident saw the safety car coming on track on lap eleven, just one lap from the end and the field crossed the finishing line behind it.

Nardilli finished fourth ahead of Pellegrini in fifth position for Target Competition while Max Mugelli rounded off the top six for team PRS Group.

Tavano heads the championship standings on 70 points with Greco second on 62 points and Pellegrini third, just two points further behind.

The next TCR Italy series round will be held at Mugello on July 19-21st.