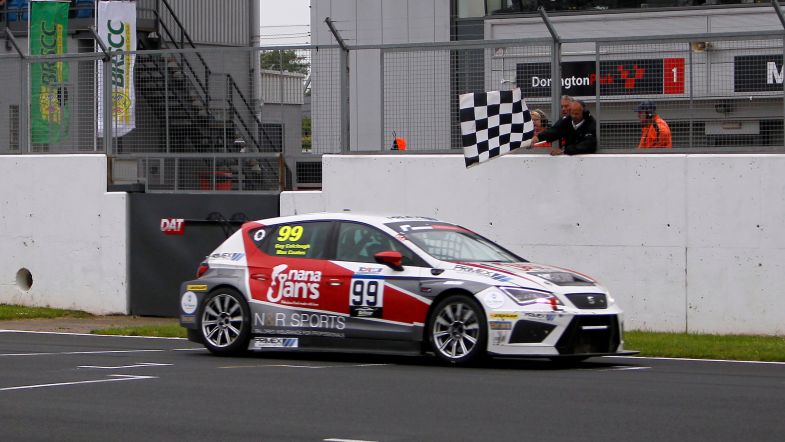 Max Coates secured his second straight win in the second race of the Touring Car Trophy weekend at Donington Park as disaster once again struck Lewis Kent who retired from the lead due to suspension failure.

The Hyundai driver started from pole position but soon came under pressure from Cupra driver Coates. Kent then went off the track at the hairpin as his rear suspension failed, forcing him to head into the pits and retirement.

Coates inherited the lead and kept it throughout the race, with Henry Neal following a couple of seconds behind to finish second in his Team Dynamics Honda Civic FK2.

Vauxhall driver Darelle Wilson made a strong start from seventh on the grid to claim fourth into the first corner. But he soon came under pressure from Maximum Motorsport driver Mark Wakefield.

Wakefield made his move at the Melbourne Hairpin and next in line to attack Wilson was James Turkington in his Ciceley Cupra TCR.

Turkington was a man on the move after a slow start to the race and soon caught Wakefield in the fight for the final podium position. The Cupra driver made a decisive move at McLean’s corner to claim third position.

Wakefield finished fourth with Wilson not far behind in fifth. Honda driver Nick Halstead crossed the line in sixth position with Audi driver Alex Day in seventh and last position.

The next round takes place at Croft on July 5-6th.