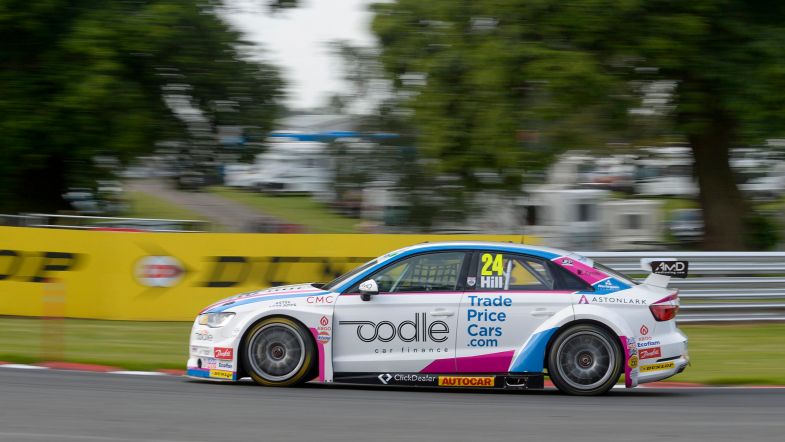 Trade Price Cars Racing’s Jake Hill took a maiden BTCC win from reverse grid pole in a crazy final race at Oulton Park, but only after a controversial clash with Team Dynamics’ Matt Neal which removed several front-runners from the action.

Hill led the first two laps from pole in his Audi S3 ahead of Neal, before the three-time champion made a clean move for the lead into Old Hall – only for Hill to make contact with the Honda on the exit, pitching Neal into a huge spin.

In a huge cloud of smoke, both Speedworks Motorsport’s Tom Ingram and Power Maxed Racing’s Jason Plato went off and damaged their cars, with Plato dropping fluid on the circuit before pulling over and retiring.

Once the dust had settled, Hill found himself with a five second lead over Cobra Sport AmD’s Rory Butcher – who himself looked odds-on for the win as he ate into Hill’s lead by up to a second a lap. But on lap 14, Butcher overshot the hairpin – potentially on the oil dropped by Plato – and slipped down to sixth,

This gave Hill breathing space and he came home just under a second ahead of Stephen Jelley, the Leicestershire man taking a second podium of the season for Team Parker Racing, with West Surrey Racing’s Oliphant in third.

Neal eventually fought back to 12th place, while Ingram retired on lap eight after dropping into the lower reaches of the top 20.

Hill, who immediately apologised to Neal in his post-race interview, will inevitably face an investigation into the move, with Team Dynamics already in race control to lodge a protest.