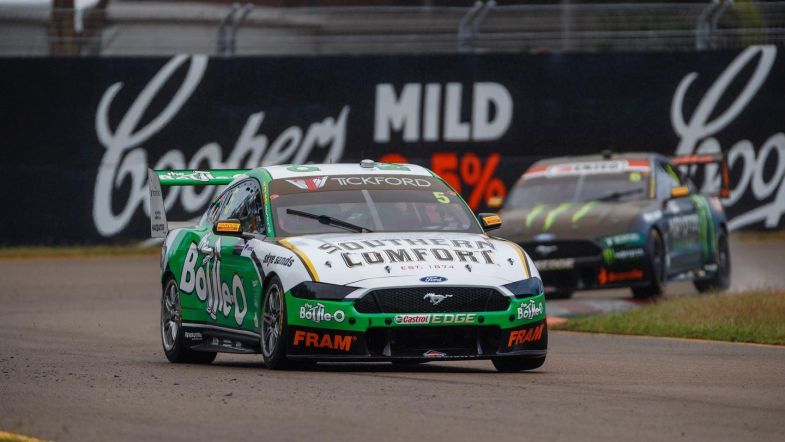 Lee Holdsworth on top in practice at Townsville

Lee Holdsworth has ended the Supercars Championship Friday practice at the top of the table after going quickest around Townsville’s Reid Park circuit this afternoon.

The Tickford Racing driver overcame an early scare in the morning’s practice session to regain confidence in the dry at the end of the day, posting the fastest time heading into a big weekend with 400km of racing.

Holdsworth only just pipped his rivals to the top spot, ending up in first by just 0.013 of a second as he completed a Tickford sweep of the two sessions.

For the first time since Townsville made its debut on the Supercars calendar in 2009, rain affected the first session of the day as the sun disappeared behind the grey clouds.

Though a majority of the field hit the track early to complete their shakedowns for the weekend, the Penrite Racing pair of David Reynolds and Anton De Pasquale elected to stay in the garage, not risking a hefty repair job for their team.

Tim Slade was the first driver to spin early on in the session, dropping his Brad Jones Racing machine onto the astro-turf which saw it pirouette onto the grass. Tickford Racing’s Lee Holdsworth followed shortly after, just managing to stay off the wall as the session stayed green.

With the track conditions not improving until the chequered flag dropped, Cam Waters from Tickford Racing ended the session at the top of the order, pipping Team 18’s Mark Winterbottom by over a second and a half for the top spot.

The afternoon practice session got underway in far more favourable conditions with the tarmac mostly dry as the sun tried to make its first appearance for the day.

Early on in the short hit-out it was the Ford Mustangs of Will Davison from 23Red, Fabian Coulthard out of Shell V-Power Racing and Waters who showed up towards the top end of the timesheets.

Waters’ team-mate Chaz Mostert spent a large portion of practice in the garage with the bonnet up on the #55 car,
championship leader Scott McLaughlin put his Shell Mustang up at the top of the order with ten minutes remaining, being the first driver under the 1:13 mark with a 1:12.937 around the Reid Park circuit.

After his spin earlier in the day, Holdsworth showed he had confidence in the #5 car, pipping McLaughlin’s time by just under two tenths to lead late in the session.

The usual last minute blast to the line saw Holdsworth retake the top spot after briefly getting knocked off the perch, beating Shane van Gisbergen from the Red Bull Holden Racing team to the top spot by just over on hundredth of a second.

McLaughlin, Reynolds, Waters, De Pasquale, Winterbottom, Coulthard, Scott Pye and Slade finished in the top ten as Mostert and Jamie Whincup missed out on the cut, both struggling for pace on the dry circuit.